The Green House, a circular building with a restaurant, has opened its doors just next to Utrecht Central Station. The modular building will stay up for fifteen years and can be fully dismantled. Cooking is done non-electrically and almost the entire building and interior is fully re-usable. What's more, the business case is profitable.

Upon entering The Green House, a number of things catch the eye. On the upper floor, there is a greenhouse with herbs and vegetables, an interior wall bedecked with tropical plants, and above the open kitchen there are two slogans in strikingly large letters: Zaai plant eet lekker [Sow, plant, enjoy food]. Groen anno nu [Going green today]. In addition to giving a clear message about the project's underlying vision, these are just two of the many stories relating to the building in terms of the repurposing of used materials. The letters of the slogans, in Dutch, form an anagram: Luitenant Generaal Knoop Kazerne. The Knoopkazerne barracks that stood right behind The Green House were converted in recent years into the Knoop, a new central government building. The letters that once adorned the old building, have now been given pride of place above the kitchen.

But that's no coincidence, as the Cepezed firm of architects was responsible for both the renovation of the barracks and construction of The Green House, together with Strukton and Ballast Nedam. The large glass façade panels all originate from the old barracks. ‘The pane size even determined the building's dimensions,’ says Ronald Schleurholts of Cepezed. ‘Everything has remained precisely as it was and even the corners are formed using complete panels, so that we didn't have to cut them.’ PUR connections for the façade walls have been consciously left out, so that they are easier to dismantle at a later date without leaving a mess. Because after fifteen years, the building must make way for a residential tower block. To remain as circular as possible, all components for the building are modular: from the foundations to the roof.

Schleurholts: ‘The foundations are compiled from prefab concrete elements. On top of that is a steel skeleton with the columns and beams all of the same length. This means that the building can be reconfigured if given a different designation, so all the material is reusable.’ Even the toilet is prefab. Further, the floor of the ground floor is made of clinkers from the old quay at Tiel. Within the building, the walls and sliding doors originate from an old office building. The foundation materials are new however, which at first glance does not appear to be circular. ‘Our basic principle is that we didn't want the material to be damaged when moving it elsewhere in fifteen years. For this reason the concrete is not reinforced,’ says Schleurholts. ‘Basically, it comes down to using as little material as possible, even if that means occasionally using new materials.’

This is what has marked the entire project: going fully circular is not possible at the moment. ‘We are doing as much as we can,’ explains Rogier Joosten, planner of The Greenhouse. ‘That means that we sometimes have to make choices that are not entirely circular, but are practically feasible. The Green House is primarily designed as an inspiration project or springboard for other entrepreneurs. Everyone is welcome to come and look at how we have approached things and to swap ideas with us. We are hoping for a copy-cat effect: all the techniques and concepts we've developed may be freely used by others.’

One healthy contribution to the positive business case of the building is the pay for use principle applied by The Green House. Operator and catering entrepreneur Albron rents everything in the building, both fixtures and fittings. The suppliers remain owner of the products and materials supplied and take them back after fifteen years. Albron only pays for the hours of lighting, for instance, and not for the lamps. Or only for the use of the chairs and not for the chairs themselves. The HRBS company tends the herbs and vegetables cultivated in the greenhouse on the first floor. Joosten: ‘We still have a long way to go as an industry. Not only for the design and the product but also for the drafting of the contract. For example, what exactly are the costs of using the lighting for an hour? We're still learning about that. Our partners are helping us with further innovation as they want to monitor their own processes using pay for use.’

The kitchen, which is after all the central element of The Green House, looks like it's already well on track. According to Ernest van de Voort, marketing & concept development manager at Albron, the amount of kitchen equipment has been reduced by forty percent versus a normal kitchen in a restaurant of comparable size. Any electricity required comes from solar panels on the roof. Cooking and heating meals is done in a pizza oven and a so-called x-oven. The former is heated using woody debris from the Netherlands Forestry Commission, the latter using pellets made from olive stones. ‘Ultimately, we want to switch to a biofuel that does not emit any particulates, although emissions are already more or less negligible,’ says Van de Voort.

Everything has been thought of: the cook works with liquid nitrogen to make ice cream instead of the traditional time-consuming freezer method. The nitrogen arrives as a by-product from refineries. There is a composting machine for food residues and consumers will also be made aware of their conduct in relation to sustainability. In a few weeks, there will be a menu that states the carbon footprint, the degree of local product sourcing and the healthiness of each meal. Van de Voort: ‘And so we hope to influence our guests’ choices in a transparent and positive way.’(Armand van Wijck) 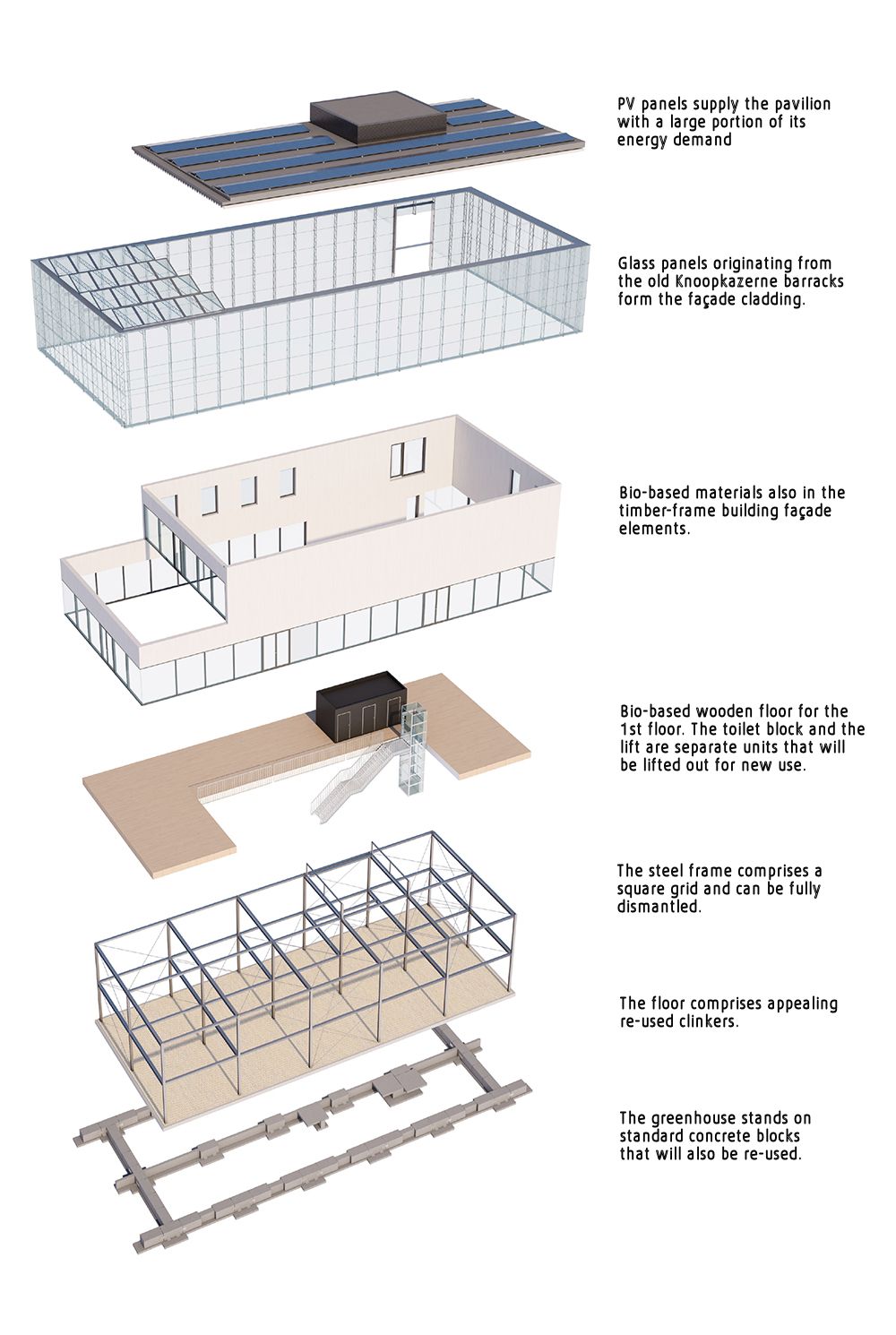