The Fraunhofer Project Center at the University of Twente has presented an assembly robot that attaches glass fibres very precisely to an optical chip. Until now, this job had been done manually and therefore slowly. The machine, which has been developed in collaboration with PHIX Photonics Assembly, is thus another step towards mass production of optical chips for applications ranging from telecommunications (5G) to biomedical sensors.

The machine was shown to the general public for the first time last Tuesday during the annual Photonics Event, bringing together companies and university researchers involved in photonics.

Optical chips will become increasingly important over the coming years, partly because electronic chips are reaching their limits. Moving and manipulating photons – light – instead of electrons has some major benefits: the data flows are quicker, the components can be packed tightly together without any problems, and the losses over large distances are much lower. On top of that, optical components that manipulate light can now be placed on chips that are just a couple of millimetres in size. The Netherlands is playing a key role in this field.

The machine that has now been presented places very slender glass fibres at the desired positions, one at a time and highly accurately. In one demonstration, for instance, sixteen glass fibres (0.1 mm in diameter) had to be placed neatly in a row. That array of sixteen glass fibres ensures that the chip is connected to other modules that use light as a data signal.

A video shows exactly what the machine does. It picks up a glass fibre, rotates it very precisely to the correct angle (which is important for getting the right optical properties) and places the fibre in a V-shaped groove. A miniature glue gun then puts a minuscule droplet of adhesive in place, which is then cured in a couple of seconds using a UV light. This firmly secures the glass fibre in place.

Until now, using glass fibres to connect optical chips such as these to the outside world had to be done manually. That is a very labour-intensive and therefore expensive process. It is expected that the market for optical chips will grow rapidly – exponentially, according to some – and automated manufacturing processes would then be indispensable. The Twente-based company PHIX wants to play a key role in assembling – packaging – photonic modules. 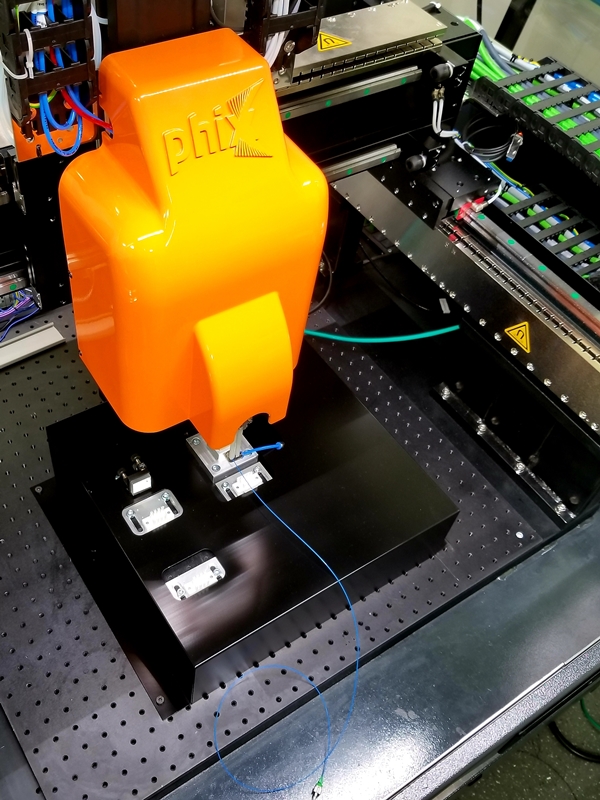 This means that the machine that has now been presented is merely the first step towards a versatile assembly robot that can for example also place spots of solder as required, and position the components of a photonics module extremely accurately.

The machine has not been designed entirely from scratch, and is in fact based on an assembly platform made by the Fraunhofer-Institut für Produktionstechnologie in Aachen. The German Fraunhofer Institute has a branch at the University of Twente (the Fraunhofer Project Center), which is further developing the machine, specifically for photonics applications.

A major advantage of the machine, which costs between 200,000 and 300,000 euros, is that it can easily be reconfigured, with other components fitted quickly. It can therefore be used for a variety of tasks, which makes it easier to recoup the outlay. According to the manufacturers, that won’t take very long anyway, given that the machine can do hours of manual work in just a few minutes.

Engineers at the Fraunhofer in Twente are currently testing what level of quality the machine achieves in comparison to manually glued photonics modules. The device is currently still only semi-automatic, as the glass fibres have to be fed in manually. The aim is now to automate that step as well.