Yesterday, twelve participants joined in the Half Marathon of Enschede with eight motion sensors on their body. Using the data they collected, a group of companies is developing a running app that recognizes injuries before they occur. When runners tire, their running technique deteriorates and they become more susceptible to injuries.

The twelve test subjects were each fitted with eight identical so-called inertial sensors from the company Xsens on various parts of their body. Each sensor recorded acceleration, angle and orientation hundreds of times a second, so that the athlete's posture was known at virtually every point in time.

The sensors were placed on the lower legs, upper legs, torso and arms. They were connected using a thin wire that sent measurement signals to a compact 300 g device secured around the waist.

‘We are really curious as to how the motion of the runners changes during a race when they get fatigued. It is already known that people start to run less efficiently as they tire. The impact on the shins is greater and the angle of the knee also increases, so that the impact from the foot landing is absorbed less effectively,’ explains movement scientist and senior researcher Jasper Reenalda from Roessingh Research & Development.

With the data gleaned last Sunday, an app will be developed for runners. This is part of a three-year Runners Assist project by Roessingh Research & Development and the Dutch companies Xsens, TRIMM and SensoRun. The aim is to create a product that can be sold in stores. This device will comprise just three sensors – which will be sufficient – that runners secure to their body, and an app that collects and displays the data. 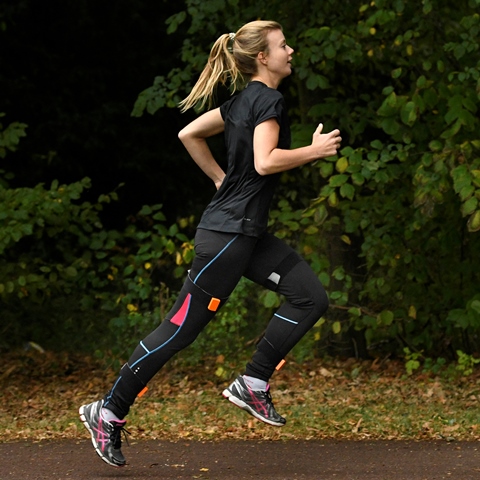 ‘The app must be able to do two things. Firstly, while running it must give real-time feedback to runners on their running technique. A possible message could be: “Take care, you're getting tired – take shorter strides”. But runners can also check out their data afterwards via a web portal,’ says Reenalda. This clarifies for instance, whether the runner has developed a better running technique over time. So the product envisaged doesn't just help to prevent injuries, but also contributes towards building up a training schedule, something which primarily (semi-)professional athletes do.

For the purpose of these trials, wires connected the sensors to one another and to the waist-mounted device, where the data was stored. ‘Last year, we did tests with wireless sensors that sent their measurement data to a central point. But this required a cyclist to ride alongside the runner. The Half Marathon in Enschede is becoming increasingly popular, so that was no longer an option due to how busy it was likely to get.’

The twelve test subjects who appeared at the start last Sunday with orange sensors, were all fit and could complete a half marathon in different times, varying from 1 hour and 20 minutes to 2 hours. ‘We deliberately used a variety of athletes, as the target group for our final product is very broad, from amateurs to professionals.’

But what would have happened if one of the runners had been injured on Sunday? ‘Fortunately, nobody was injured, but from a scientific point of view it would have been interesting,’ admits Reenalda. ‘Had an injury occurred, then it would likely have been an acute injury, which is very difficult to predict using the data. But you never can tell, we could have seen some striking anomaly.’