Based on the current measures in place, we will not achieve the climate targets of the Paris Agreement, so supplementary measures appear to be needed. One of these is solar geoengineering – blocking the sun's rays by seeding particulates in the atmosphere or making clouds whiter, for instance. These techniques will likely become indispensable if we are to achieve climate targets, researchers in the US write.

Researchers from three universities in the United States have now described the potential and the limitations of solar geoengineering in an article that appeared earlier this week as part of a special edition by the British Royal Society, entitled ‘The Paris Agreement: understanding the physical and social challenges for a warming world of 1.5 °C above pre-industrial levels’.

The idea of partially blocking sunlight comes from nature itself. When Mount Pinatubo erupted in 1991, this led to a decline in the average temperature on earth of 0.5 °C. This cooling was down to the large volumes of dust in the air that blocked some of the sunlight.

This principle could therefore also be used artificially to slow down global warming a little. That's called solar geoengineering – deliberately blocking part of the sunlight.

The scientists start the article with an inconvenient truth: we are not going to achieve the Paris targets (to keep anthropogenic temperature increases comfortably below 2 °C) with the concrete measures that various countries have taken or committed to in order to reduce their CO2 emissions.

Assuming that, in addition, we can capture and store large amounts of carbon dioxide from the atmosphere, temperatures will decline again over the longer term (see figure below). But in the meantime, the earth's temperature will rise too much – to prevent that, solar geoengineering could play a role, they assert.

However, the authors warn that solar geoengineering is far from a mature technology. They list five variants (see table below), but only really have confidence in just one of these methods for blocking a substantial amount of sunlight. This is also the best-known approach, seeding the atmosphere with sulphur dioxide particles (SO2), from either aircraft or hot-air balloons or by shooting the substance into the air using cannons.

Salt crystals and a space parasol

Another way to partially block sunlight is by introducing salt crystals into clouds, making them brighter white and reflecting more sunlight. Even more exotic – and more uncertain – is the technique known as cirrus thinning, making cirrus clouds thinner, so they retain less incoming infrared radiation. And finally, there is the notion of hanging a gigantic structure in space that blocks part of the sunlight – a space parasol. This might sound like a cool idea, but the researchers estimate that it would be far too costly.

The researchers were the first to combine a number of existing climate models that include the effect of solar geoengineering. They can then calculate the expected impact on temperature everywhere on earth and anticipated rainfall (see figure below). Because there are many uncertainties inherent in these models, the researchers emphasize in their article that you cannot draw too many conclusions from this. 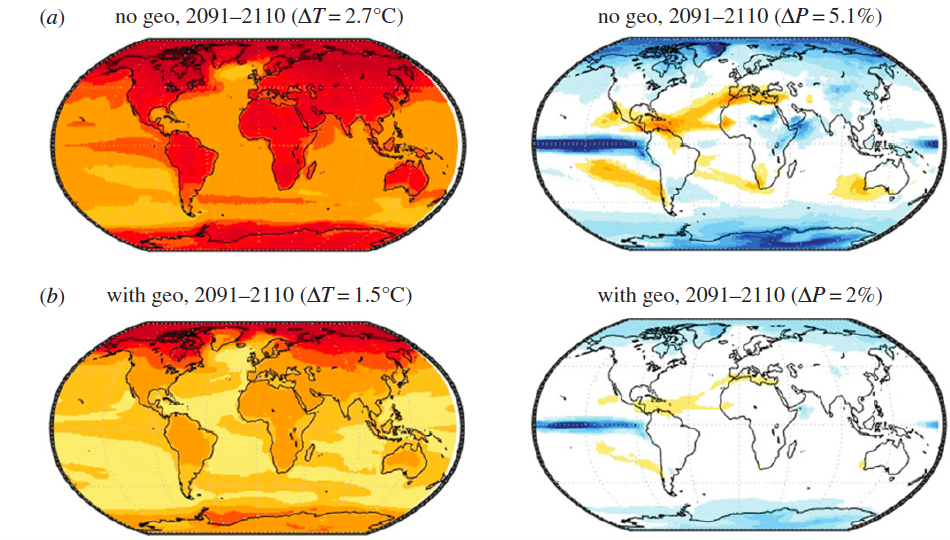 ‘The only conclusion to draw without further research is that it is plausible, based on current model simulations, that a limited deployment of solar geoengineering in addition to mitigation of greenhouse gas emissions could lead to a climate much more similar to a 1.5 °C-climate,’ the authors write. But it is certain that simply reducing emissions will be insufficient to achieve the Paris climate targets.

For the time being, only the effectiveness of aerosols (adding SO2 particles to the atmosphere) has been sufficiently demonstrated. Further research is required for the other solar geoengineering techniques referred to above.

The researchers also stress how important it is to reduce our emissions. Solar geoengineering cannot solve everything, and also has unwanted side effects, such as extreme drought on a local scale, or the opposite, heavy rainfall, which could especially hit poor countries the hardest. And finally, we have to think of future generations. ‘... even moderate deployment imposes a constraint on future generations to either maintain the deployment or accept the consequences of phasing it out.’ We should only use this measure in a limited way, but study it more seriously.

Incidentally, the idea of geoengineering is not new. At the beginning of this decade, there was a heated discussion about this subject.

Opening photo: Satellite image of the east coast of the US, where the emissions from shipping make the clouds thicker. Other images: MacMartin et al., Phil. Trans. R. Soc. A, 2018