Last weekend, a 325-km-long submarine power cable between the Netherlands and Denmark came ashore at Eemshaven. This high-voltage cable will enable the exchange of surplus electricity.

This is the COBRAcable, an initiative by TenneT and the company's Danish counterpart Energinet. Buried 1.5 m deep under the seabed, the cable is a so-called HVDC cable (high voltage direct current cable, in this case 320 kV). Direct current is more suitable than alternating current for long distances, as less current loss occurs.

Dutch newspaper De Volkskrant referred to it as a '325-kilometre-long extension lead’. While that description may be a little popularised, the cable between Denmark and the Netherlands will indeed be useful. After all, the power connection will play an important role in rendering the European power supply more sustainable. With the development of more and more wind farms and solar parks, the electricity supply will fluctuate more than is currently the case. If a country has a temporary power deficit, this can be sourced from another country. This exchange via chunky cables such as the COBRAcable - known as interconnectors - has been prompted by price differences on the international market for electricity.

Denmark currently has more wind farms than the Netherlands, and TenneT therefore estimates that in the beginning the electricity will be transmitted mainly from Denmark to our country; roughly 70% of the time. However, the Netherlands has plans to develop a couple of large wind farms in the North Sea over the next few years, which will increase the volume of electricity to Denmark.

From the inside out, the chunky COBRAcable comprises a solid aluminium core (2500 mm2), a layer of loose wires, a thick protective synthetic layer, a steel ring and another protective layer. It has a power capacity of 700 MW, which means that it can transmit the power produced by around 200 large, modern wind turbines operating at full speed in the wind. If the concept of wind turbine power is difficult to fathom: this is the amount of electricity consumed by 700,000 people all using an electric kettle. 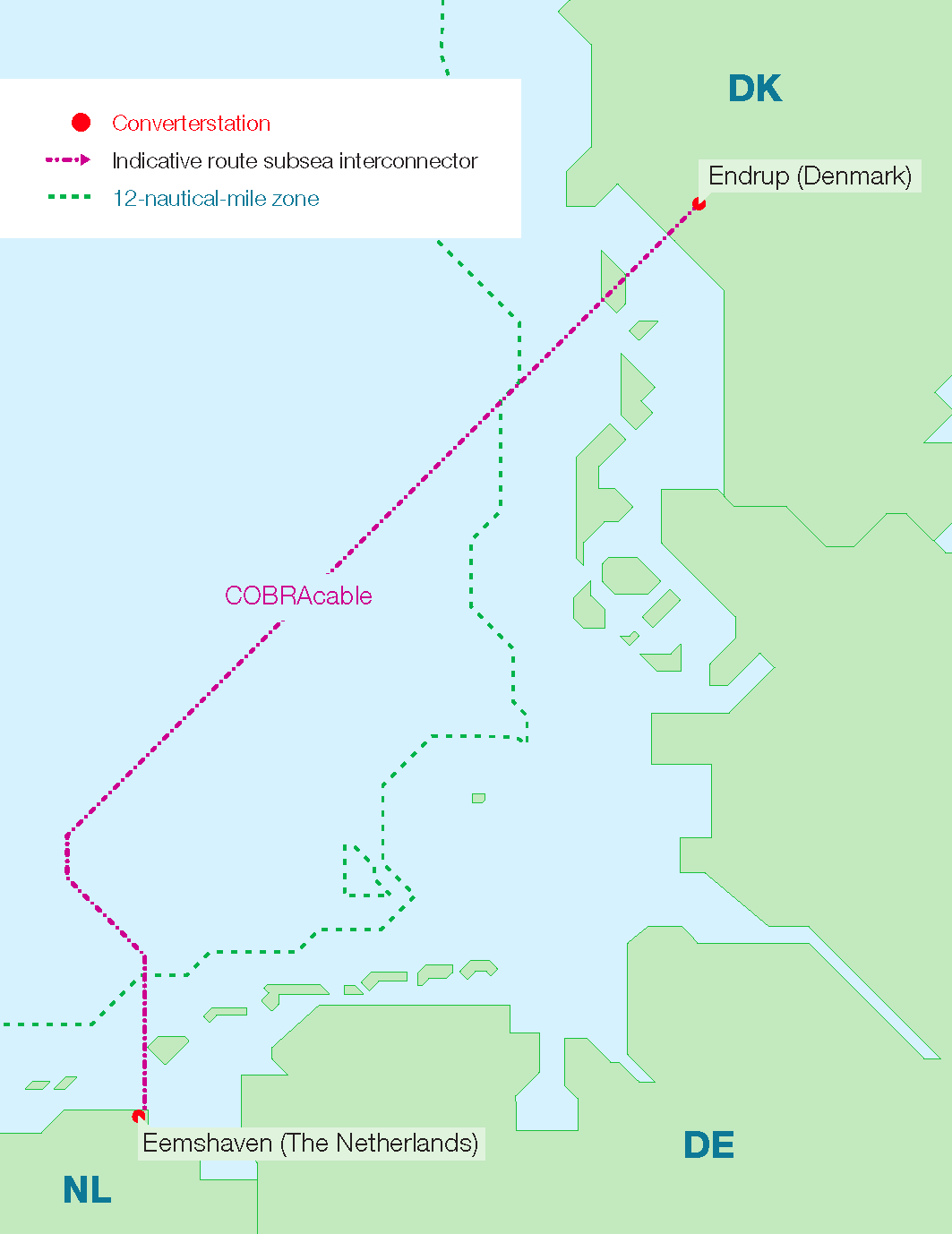 The cable is not completely ready yet. TenneT is currently celebrating the fact that it has been brought ashore at Eemshaven and has been installed through the dike. The construction of the final stretch of cable, 20 km long, in the German section of the Wadden Sea is scheduled for mid-2019. Once that has been completed, a testing period can begin. By the end of 2019, the two countries hope to be able to exchange power with one another.

The chunky COBRAcable also contains a glass fibre connection. This is first and foremost intended for communication between the two converter stations in the Netherlands and Denmark. However, it will also enable the detection of error locations, and can even measure the temperature of the cable.

The power cable has actually been designed to enable the connection of wind farms in the future. There are no concrete plans for such farms yet, but it is a useful option to have in the waters between the Netherlands, Germany and Denmark, where it is generally pretty windy.

The Netherlands has also established power connections with other countries in Europe. Norway has been connected by the NorNed cable since 2008. The BritNed cable has been in place between our country and Great Britain since 2011. Furthermore, construction has already begun on another cable to connect to hydropower producer Norway: the NordLink.