Engineers at the Massachusetts Institute of Technology have designed a small, modular boat that could be used in future in cities where there is a lot of open water, such as Amsterdam and Venice. The autonomous vessel can be made using a 3D printer and it is capable of manoeuvring very precisely.

This creation is part of the ‘Roboat’ project at MIT and the Amsterdam Institute for Advanced Metropolitan Solutions (AMS). This means that the new boat is actually a follow-on from the prototype that was built in 2016 – see ‘Amsterdam is testing autonomous vessels’.

At first sight, the new boat looks like a shallow bathtub. It is rectangular, measuring two metres by four, with a shape that allows it to move sideways just as easily as forwards. To create the boat, the researchers printed sixteen hull parts using a 3D printer and then glued them together. The whole object was then given several layers of fibreglass to protect it.

3D printing is very handy when developing new products, but if these small boats are to be produced in large numbers, a serial production technique would be more obvious because of the economies of scale.

What is on the boat is unusual: it is chock full of sensors. To get the positioning right, it has GPS on board to start with. But that is not accurate enough, and so the boat has additional systems on board (based on technology such as ultrasound) to permit navigation that is accurate to just a few centimetres. Finally, there is an inertial measurement unit – a combination of accelerometers and gyroscopes – that measures the rotation and angular velocity continuously.

This high degree of precision is required because the idea is that large numbers of these boats could cooperate to produce temporary infrastructure elements such as a pontoon bridge during busy events or a temporary concert stage on a canal. “Those are activities that normally take place on land, but which can disrupt the traffic flows there,” says Daniela Rus, an MIT professor, in a press release from the university.

The small boat is versatile. It could be used for transporting people within the city, or for getting goods from A to B. In both cases, using small and simple boats lessens the traffic burden on the often busy roads in a major city. The way the MIT researchers see it, this type of quiet and autonomous boat could also be used at night. “Imagine if we were able to move some services to the night-time hours, such as parcel deliveries and rubbish collection,” says Rus. The team must also have thought that if you have modular, autonomous boats that are going everywhere, you might as well kit them out with sensors that measure the water quality. 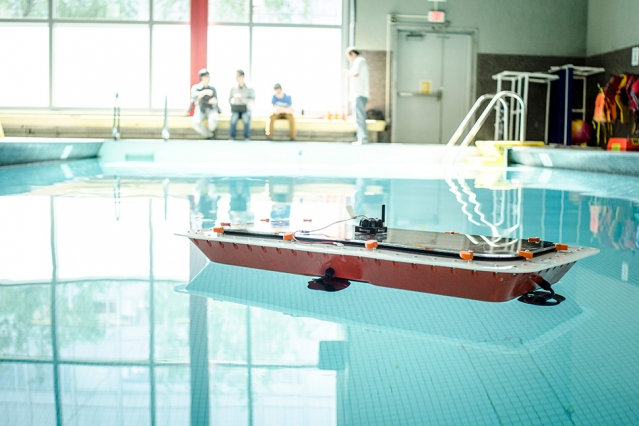 The boat’s drive system is unusual too. It has four thrusters – bow propellers – in the centre of each of the sides. This allows it to keep applying small bursts of power so that it will stay precisely on its spot, or for example to let it sail along a predefined path.

Attention has been paid in particular to the control technology for steering the craft. The researchers used an algorithm for this (nonlinear model predictive control) that is normally used for robots. To make it suitable for boats, they extended the algorithm with parameters that included the resistance of the boat in the water and centrifugal forces.

This control algorithm has the job of comparing the measured position against the desired and programmed route of the boat every 0.2 seconds. If there is any deviation, the thrusters are engaged to bring it back onto the desired path. The first trials on the Charles River, which runs past MIT, gave the results they had hoped for.

The next step for the team is to adapt the control algorithm so that it is suitable for various types of cargo. This is because the inertia and the resistance in the water vary, depending on whether it is carrying people or freight. The algorithm is also going to be extended to allow the controls to handle stronger currents in the water. “The canals in Amsterdam don’t have much in the way of intrinsic currents, but we do have to take account of the flows caused by a big boat as it goes past.”

It will be a few years yet before we can marvel at swarms of these autonomous little boats throughout Amsterdam, but the first practical tests will be held sooner than that.