Dutch and Spanish scientists have discovered a molecular switch which functions under the influence of light. It was already known that such things existed, but this one is much more compact than its predecessors. And that comes in handy if you want to use such a switch to make new materials for the targeted release of medication or to trigger a chemical reaction, for instance.

Nature is full of molecular switches: large molecules that flip over or rotate under the influence of light or heat. The principle forms the basis for many processes in our own body, such as the contraction of muscles or the function of our eyes.

Scientists are very interested in such switches. Not only to understand nature better, but also to come up with new materials or applications for these minuscule mechanisms, such as the dosed release of medication in the body or triggering the catalysis of substances. The components can also be made to form molecular machines.

The Dutch Nobel Prize winner Ben Feringa has been studying molecular motors for years already. One thing he is famous for is his molecular car.

But there is now a switch that makes a cycling motion, the University of Amsterdam (UvA) reports (press release). Chemists from that University (from the Van 't Hoff Institute for Molecular Sciences) and colleagues from the Spanish University of Murcia have demonstrated that a certain molecule flips over under the influence of light, or jumps from one state to another. The motion takes place in a small space and it's precisely that property that can be very useful for building molecular machines that are required to work in areas where there is very little room to move.

The study is described in an article in the prestigious journal Angewandte Chemie of 12 February, which even dedicated a full cover to it. The first author is Saeed Amirjalayer, who carried out the work at UvA, but is now affiliated to the University of Münster.

The idea for the new switch originates from Spanish researcher, Professor José Berná. He came up with a molecular switch based on a so-called azodicarboxamide chromophore (a chromophore is the part of a molecule that is responsible for absorbing light). This molecule looks like azobenzene, one of the most commonly used molecular components in materials that switch using light.

The proposed molecule has a spatial, three-dimensional structure, in contrast to many other molecules, which are flat. There was already a suspicion that the new molecule would act as a switch. It's just that nobody yet knew how.

But, thanks to the Spanish-Dutch research team, that's all changed now using a number of testing methods and quantum-mechanical calculations. The researchers first used infra-red pulses on the material. Most light is absorbed at a certain wavelength. Based on how this wavelength changes over time, it can be derived how the structure of the molecule changes. These measurements were then confirmed using quantum-mechanical calculations.

This revealed that the molecule being studied switches using a mechanism that is somewhat similar to the bottom bracket on a bicycle. The analogy isn't entirely correct, as a bike pedal rotates fully, while the newly discovered mechanism jumps from one state to another. ‘Two different chemical bonds that both slide a little provide this rotation’, according to Professor Wybren Jan Buma from the University of Amsterdam.

The most striking part of this motion is that the atoms involved only move a fraction. In other words: the molecule remains more or less in the same place and uses very little space to switch. That could be very advantageous for all sorts of practical applications, as space is often very limited. Buma: ‘In a polymer, for instance, molecules have limited room to move.’ 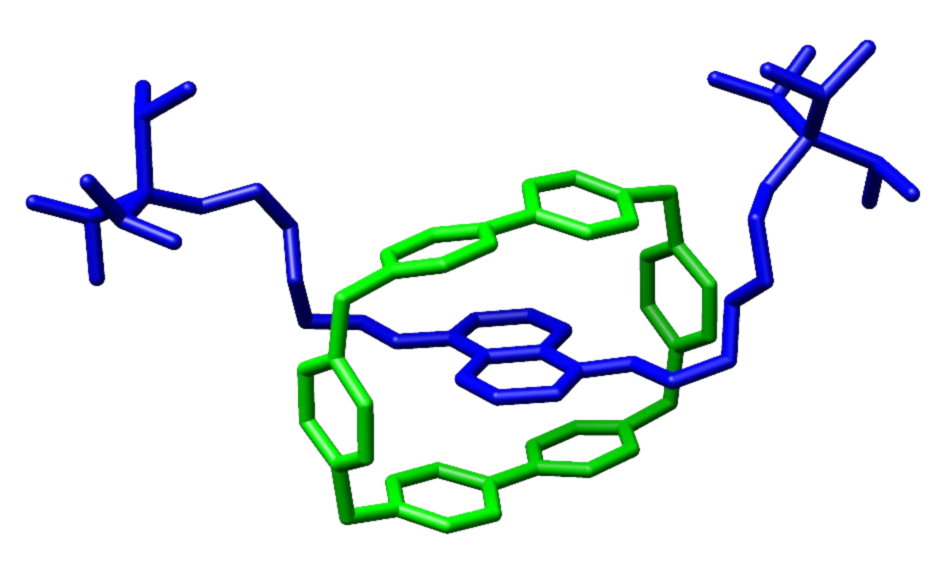 Buma and colleagues in Amsterdam want to put this switching action to good use, for instance to trigger so-called rotaxanes (see image to right). ‘These are long, sinewy molecules with a ring around them. We hope to use the switch to trigger the ring to rotate or move across the sinew.’

The researchers in Amsterdam have previously shown that rotaxanes (see illustration above) can be used to, for instance, change a surface from hydrophobic (water repelling) to hydrophilic (water loving). But another example could be a switch that releases a medicine on command or operating a catalyst.