This week, the world's fastest lowracers are battling it out against each other in the Nevada desert. Among the competitors is the Human Power Team from the Netherlands, comprised of students from Delft University of Technology and Amsterdam’s Vrije Universiteit. They designed and built the Velox8, a highly aerodynamic lowracer full of smart gadgets.

Battle Mountain, an otherwise quiet town in the American state of Nevada, is host to the event once a year, when it receives groups of lowracer fanatics. That time has come around again this week, as the World Human Powered Speed Challenge gets underway. 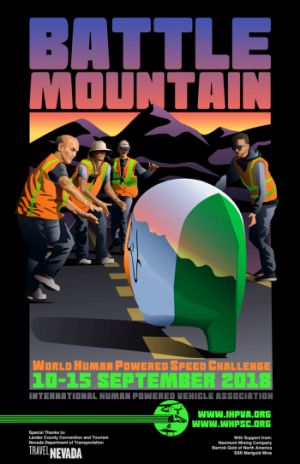 Every day in the morning and evening, a beautiful flat stretch of asphalt road south of the town called the SR-305 is closed to normal traffic, and taken over by lowracers. Every two minutes, one tries to reach the highest possible speed. In the qualifications, riders try to reach their maximum speed over a 2-kilometre stretch of road, whereas in the finals this is extended to 5 kilometres. In both cases, the speed is measured over a distance of 200 metres.

The world record for men is 144.17 km/h, and 121.8 km/h for women. The latter record is being challenged this year by the Human Power Team, with cyclists Lieke de Cock (right on the photo) and Jennifer Breet competing on the self-developed Velox8 lowracer. The number 8 represents the number of times a team of students has taken part in the annual event (since 2010). The Human Power Team is a collaboration between technology students from Delft University of Technology, and training schedules and sports nutrition students from Amsterdam’s Vrije Universiteit.

Anyone who wants to go extremely fast on a lowracer has to deal with the aerodynamics down to the last detail. That is why the rider will be under a closed hood, that will now also enclose the rear wheel for the first time. According to the team, this contributes to up to 80% of the air flow around the Velox8 being laminar. The longer a flow around an object remains laminar, the lower the air resistance. 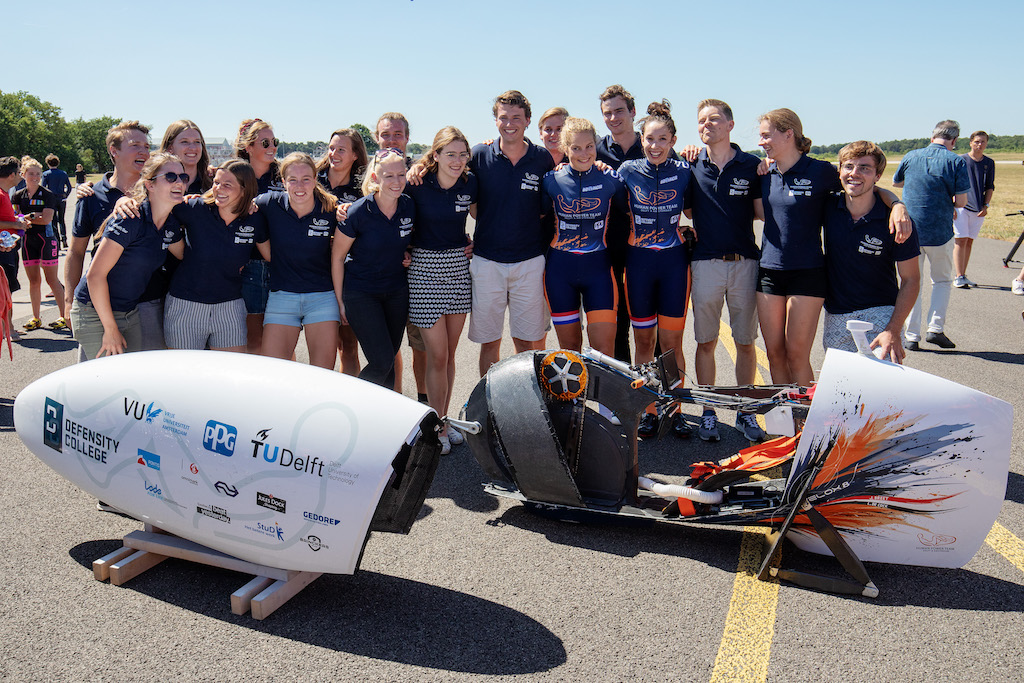 Then the gearing... If you want to reach 120 km/h on a bicycle, you need very high gearing. At these speeds, the bicycle wheels rotate fourteen times for each rotation of the pedals. To achieve this gearing, the drive is separated into two stages.

In addition, the gear change has a special design feature. With an ordinary bike, the derailleur system guides the chain over a block, but with the Velox8 it is exactly the other way around. The chain remains in place, while a servomotor moves the block. The team says this means the chain is always in line with the cogs, which has two advantages: firstly, there is less friction on the chain, and secondly, 'there’s no need to take into account a maximum angle of the chain in relation to the cogs, so the crank and the block can be closer together.' In other words, a more compact design is possible, and small is beautiful if you want to go fast.

The sports engineer is a new addition to the Human Power Team. This person is responsible for matching the bike to the rider as closely as possible. This includes making a perfect tailor-made seat based on 3D scans of a rider’s back, both saving space and keeping a rider comfortable.

Safety is also an important aspect for the Human Power Team. For the first time, students have built a front roll-over bar into their lowracer. This reinforcement at the front of the bike is designed to protect a rider’s legs in the unfortunate event of a crash. It is very reminiscent of the structure on a Formula 1 car, which protects the driver's head.

The bicycle has no windows that the rider can look through, as this would have a negative impact on the aerodynamics. Instead, the bike is fitted with a camera that sends images of the road to a screen. The rider will also receive a live data feed with info on the power she is generating with the pedals, speed and cadence. The coach in the chase car behind the lowracer can also monitor this data, and use it to fine-tune the strategy for a perfect race.

The students at Amsterdam’s Vrije Universiteit trained cyclists Lieke de Cock and Jennifer Breet as if they were Olympic athletes. They enjoyed individual training schedules, special nutrition, and even virtual reality (VR) training, where they could use VR glasses to experience what it's like to cycle so fast without being able to see the road directly.

De Cock and Breet will have to get up nice and early for the next few days. They’ll be aiming to ride as fast as possible from 6 a.m., with another chance in the evening.