Kitty Hawk, a company headed by the ‘godfather of autonomous driving’ Sebastian Thrun, unveiled its autonomously flying air taxi Cora on 13 March. The electrically powered aircraft takes off and lands vertically, offers room for two people, and flies 100 km on a single battery charge. There is no pilot on board.

To take off, the air taxi features six smaller propellers on each wing. The rotor blades are mounted horizontally to allow VTOL. So the aircraft takes off much like a drone does. But once it is airborne, the propellers tilt forward to provide thrust. However, the airborne speed is primarily provided by a much larger propeller to the rear of the aircraft. Cora has a wingspan of 11 m, an airspeed of some 180 km/h and flies at a height of roughly 900 m.

According to Kitty Hawk, the company that has developed the machine over the last eight years, Cora can fly for some 100 km on a single battery charge. Details about the battery pack are not known.

The intention is that the unit will fly entirely autonomously, so without a pilot on board. Likewise, any details regarding the method of navigation and safety measures in case of an emergency stop have not yet been released. 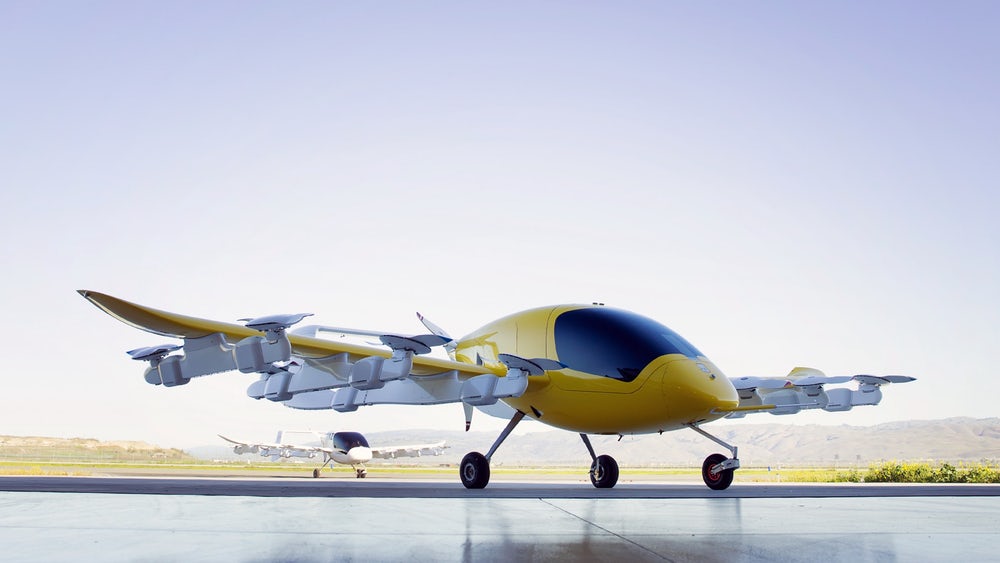 Kitty Hawk is headed by Sebastian Thrun, the man who made his name in 2005 with the first self-driving car. Until 2014, Thrun was at the helm of Waymo, Google's project for self-driving cars. One of the financiers of the Kitty Hawk is joint founder of Google, Larry Page.

The Cora represents a new step for Kitty Hawk towards its ultimate goal: to develop a fleet of autonomously flying air taxis. In New Zeeland (where the company has been developing its autonomous taxi for some time under the name Zephyr Airworks), an approval procedure has started to obtain the necessary certificate of airworthiness for Cora. According to the Kitty Hawk website, they chose New Zeeland because of its combination of adequate, safety-oriented regulations, and willingness to offer space for experimental machines.

Other initiatives are under way with similar air taxis. The most advanced seems to be the Volocopter, in which car manufacturer Daimler is involved. It is a unit that is equipped with eighteen horizontally rotating rotors, and looks most like a drone. But there are also concepts that aim to combine driving and flying. Aircraft manufacturer Airbus and car manufacturer Audi recently released their design for the Pop.up Next, a cabin that can either be mounted on a set of wheels or slung under a set of propellers on the roof, depending on whether the user wants to drive or fly.

Dutch company Pal-V launched its flying vehicle at the Geneva International Motor Show, but unlike the other models, it does require a short landing and take-off strip.

What makes Kitty Hawk's Cora so special is its emphasis on autonomous flying. The Pal-V pilot does require a pilot's licence, albeit a basic one.