Gasunie and AkzoNobel want to build a 20 MW electrolysis factory in Delfzijl, they announced today. The installation will convert water into oxygen and hydrogen, with the hydrogen gas used to power clean cars and buses and as a raw material for chemical concerns.

The companies are now studying whether there is a good business case to be made for the hydrogen factory. Next year, they will decide whether to initiate the project.

Hydrogen will play a role in greening our society and cutting CO2 emissions (read: ‘Netherlands – land of hydrogen’). The gas can serve well as a store of surplus green energy. If more energy is required at a later moment than can be supplied by solar and wind farms, then you simply burn some hydrogen in a power station. Another benefit is that hydrogen gas can be transported, not just overland in pipes but also across the ocean in large ships.

‘We see power-to-gas as a promising technology that is necessary to arrive at a fully sustainable energy mix by 2050’, says Ulco Vermeulen, member of the Executive Board of Gasunie, in a press release.

Delfzijl is also a logical location for this project. It is a junction where major power cables merge from different directions, including the cable from Norway that can supply power almost continually from the dams there. On the other hand, chemical companies – such as AkzoNobel – who can use hydrogen as a raw material when producing their chemical products. That hydrogen is now produced from natural gas. ‘At the moment, truly green hydrogen is still too expensive to be competitive, but this sort of project can drive the price down’, says spokesperson Gerben van Dijk from Gasunie. 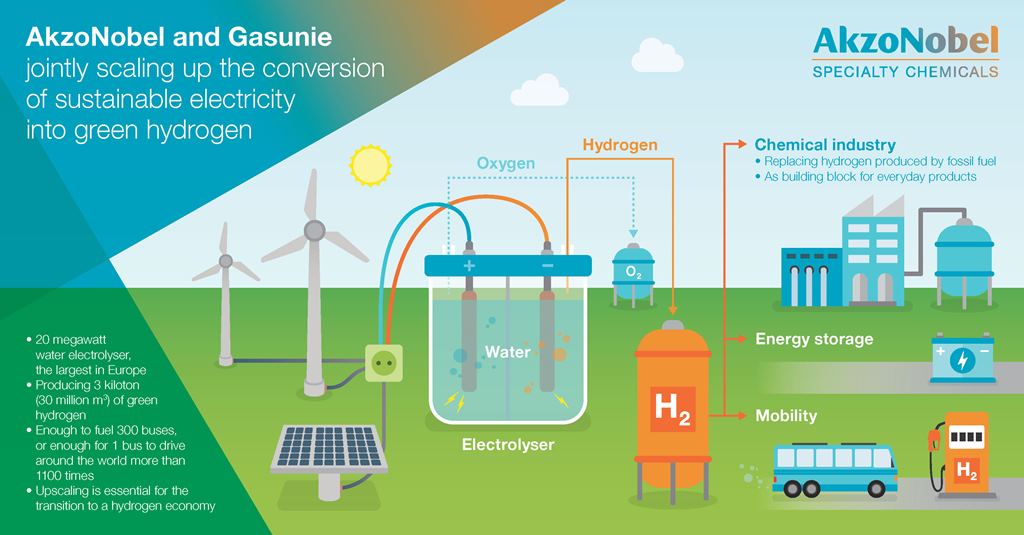 Electrolysis is a fairly mature technology. And yet a lot of new expertise will be needed for scaling-up. Part of this will be gained through a project that Gasunie is working on in the Zuidwending in the northern province of Groningen. There the company is building a major 1 MW electrolysis plant together with Energystock (read: ‘Gasunie gets into hydrogen’), for now the largest in the Netherlands.

Furthermore, AkzoNobel has a lot of experience already with electrolysis technology, as it produces chlorine using the process. Gasunie brings to the table its expertise in storing and transporting gases.

The hydrogen produced can be supplied to companies on the chemical park in Delfzijl, who will use it to produce methanol and ammonia (read: ‘Opportunities for hydrogen economy in Groningen’). Buses in the province of Groningen can also drive on the gas. ‘There are already a couple of hydrogen buses running between Groningen and Delfzijl, but this number needs to rise to twenty over the coming years’, says Van Dijk. There are also plans for fuel stations supplying hydrogen in the region. It's also possible that trains could swap their diesel for hydrogen power on the non-electric routes in the north of the country.