If you want to make a building largely energy-neutral, there’s so much more you can do than just fitting endless solar panels. Hotel Breeze, which opens its doors in Amsterdam this spring, also uses sunlight to heat water for the showers and heating in hotel rooms. Meanwhile, a cascade of droplets powers the ventilation.

If we were to write about every hotel currently opening its doors in Amsterdam, it would be the only subject that De Ingenieur could cover. But we’ve made an exception for the brand-new Breeze Hotel, built on IJburg, an artificial island in Amsterdam.

From the outside, this looks like any other modern, comfortable hotel, but on the inside, sun, wind and cascading water are used to ventilate and cool the rooms and supply hot water. The hotel is the work of the Amstelius/Dutch Green Company in association with Borghese Real Estate and Bronconsult. The man behind the latter company, Dr Ben Bronsema, came up with his Earth, Wind & Fire concept around 2008, and made it the subject of his PhD completed in 2013. Elaborating upon this concept, ventilation in the Breeze Hotel’s nearly 200 rooms and communal areas is not controlled by a single main air-conditioning unit, but by natural processes: the air is set in motion by cascading water droplets and by sunlight that heats the air in a vertical column. 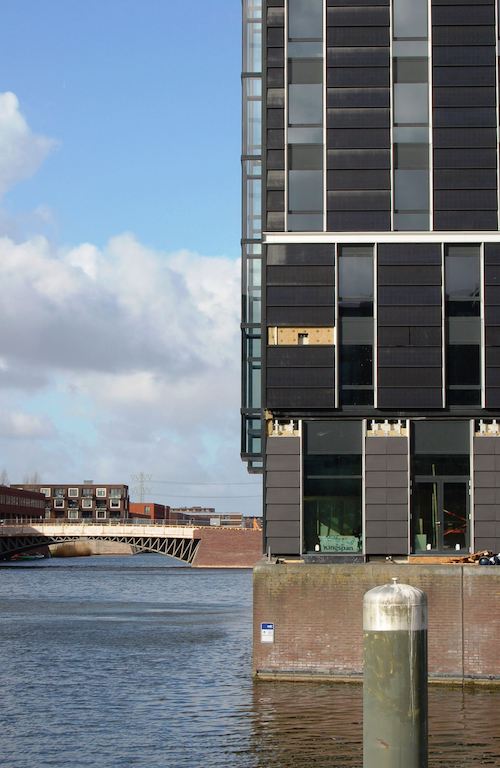 We were invited to take a look around a few weeks before the building was completed. It was nice and sunny, so we were given a perfect demonstration of the two solar chimneys on the south-west façade. A solar chimney is a column of glass with a rear wall covered with black solar panels. When sunlight hits the chimney, the air in the column warms up causing an upward airflow. The fact that this principle also works in practice became evident when we reached the tenth floor. Poking your hand into one of the chimneys, you feel the warm air rising up through the long vertical shaft.

The heat generated by the air in the solar chimneys, which can reach temperatures of up to 60°C, is transferred to a water circuit via a heat exchanger. A central heat pump ensures that the water reaches the temperature needed to heat the hotel rooms. Every room is heated separately with its own ventilator-convector. The hot water is also used for the showers.

‘On a sunny day, we don’t need all the heat produced in the solar chimneys, so we use underground thermal storage for the excess’, explains Ronald van Luijk from Green Building Engineering, the project’s installation consultant. Heat can be extracted from this storage facility in the winter. The airflow generated in the solar chimneys helps to ventilate the rooms in the building. As a result, the ventilators can be turned down or even switched off.

A window in one of the corridors looks out onto another deep shaft in the centre of the building. Nine large metal sprinklers have been fitted to the ceiling, from which water droplets drip into the climate cascade. These droplets primarily activate an airflow, which like the solar chimneys, helps to ventilate the hotel and rooms and communal areas.

But this is not all that the droplets do. The water comes from the ground and is cold, about 13°C. In the summer, these droplets cool the air drawn in from outside to 18°C to cool the rooms via the same ventilator-convector that heats them in the winter. In other words, natural air-conditioning. In the winter, it works the other way around. The droplets heat the cold air drawn in from outside to around 8°C. A heat pump then completes the job by heating the air to 18°C so that rooms reach a comfortable temperature. This obviously requires less energy than if cold outdoor air were to be used in the first place. The falling droplets serve as a kind of heat exchanger with an extremely large surface area. The size of this surface area means that the system continues to work even when there is only a small difference between the temperature of the water and that of the air.

Want to read the full article on Hotel Breeze? Download this pdf-file.