The Dutch terminal operator Koninklijke Vopak has scored a first this week, by sticking solar foil to the roof of one of its oil storage tanks in Vlaardingen.

This is still an initial test phase, says Khalid Saleh, energy coordinator at Vopak. It is intended to measure the yield of the solar cells and to establish whether the film, which is glued to the storage tank, remains adhered to the roof in all kinds of weather.

For the test, Vopak selected a storage tank for edible oils. “These oils are less explosive than other more flammable types, so the regulations on using the roof are more flexible,” says Saleh. The solar cells were supplied by the Dutch company HyET Solar, in the form of a lightweight foil called Solar Power Foil. This is particularly suitable for use on the tanks, according to Saleh. 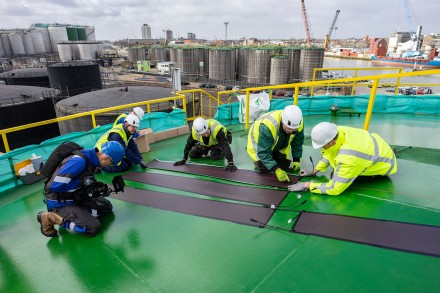 Part of the electricity generated will be used in the storage tank itself, for tasks such as pumping up the oil. The solar cells are connected to the electricity grid, so any surplus energy can be injected into the network. The first solar roof, which is on a storage tank with a diameter of 15 metres, is expected to generate 8 to 10 kW of power.

If the test is successful, the company wants to generate solar energy on other storage tanks as well. One of the options is to cover both the roofs and the sides of the storage tanks with solar foil. This means the available surface area is potentially huge as Vopak operates almost 1,000 storage tanks in the Rotterdam port area alone.

"In addition to insulation, this Solar Power Foil is one of the measures we’re currently testing to see how we can further reduce our CO2 footprint," reveals Ard Huisman, managing director of Vopak Vlaardingen in a press release.

The Solar Power Foil is a Dutch product, initially developed by Helianthos before it was acquired by HyET Solar in 2012. Although the foil has a lower yield per square metre than rigid silicon solar cells, it does have some distinct advantages. For example, the film can be stuck on roofing which isn’t flat, as was shown in a test on a refugee tent. In addition, the foil is light and easy to handle, which simplifies the installation process. And finally, solar foil is manufactured in a continuous roll-to-roll process, which is relatively inexpensive.

In 2017, two US companies installed a similar thin film solar cell system on a tank in South Portland, Maine.