Technology certainly helps us overcome our physical limitations, but we must be careful that new technology doesn’t endanger our spiritual well-being. That was the message transmitted by the Dalai Lama, spiritual leader of the Buddhist faith, at a meeting in the Nieuwe Kerk in Amsterdam last weekend.

It turns out that the now 83-year-old Dalai Lama loved taking watches to pieces and putting them back together again when a child, so it’s possible that the spiritual leader might otherwise have been a good engineer. One thing is certain, though: he has an inquisitive mind, as witnessed by the questions he asked the scientists who participated in the Dialogue on Compassion and Technology, on the occasion of the opening of the Buddha’s Life, Path to the Present exhibition in the Nieuwe Kerk in Amsterdam, which opened its doors to the public today.

When 13-year-old British girl Tilly Lockey went on stage to show the Dalai Lama her two bionic arms (she lost hers at a young age because of meningitis), he immediately asked her to pinch his outstretched finger. ‘Wow, very strong!’ was his astonished reaction, to the amusement of the audience.

The Dalai Lama was clearly charmed by the social dinosaur robot brought to the event by professor Maarten Steinbuch of Eindhoven University of Technology and SingularityU. The creature reacted to being tickled by the Dalai Lama, who responded with a spontaneous roar of laughter.

The spiritual leader’s eyebrows were raised even further when he saw the little white robot AV1 (see photo on the right), brought along by the Norwegian Karen Dolva from the company No Isolation. The robot allows children at home with a serious illness to follow social events at school, so that they are still part of the class when they return. 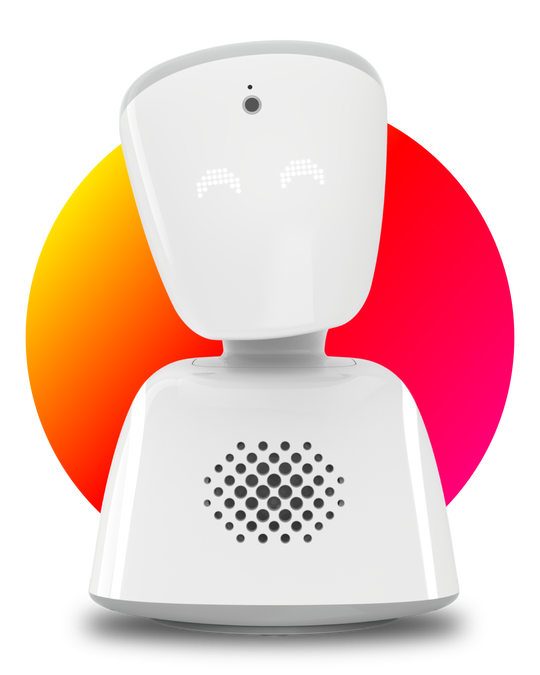 During the demonstration, the robot was controlled from a distance by a lady called Jade in the UK. The Dalai Lama was clearly fascinated by the smooth white object. 'Can Jade see me?' he asked Dolva, who confirmed she could. 'Yes, I can see how good-looking you are,' came Jade’s reply from England.

One question repeatedly heard at the event, predictable given that the meeting was co-organised by die-hard techno-optimists SingularityU (see: 'Tsunami of technology at SingularityU Summit'), was: 'Will the computer ever be able to match human intelligence?'

The Dalai Lama responded clearly: 'It doesn’t matter how intelligent a machine is, it will never be able to match human intelligence.' Although he did immediately add a caveat: 'Unless you can show me in the future that I'm wrong.' His sparkling eyes revealed that the spiritual leader likes to stay ambiguous at times.

The second dialogue was about aging, illness and death, a fascinating theme to put to a religious leader who believes in reincarnation. Belgian doctor, researcher and writer Kris Verburgh kicked off with an optimistic story about recent scientific work in which he succeeded in making mice physically younger. Their grey fur with bald patches became full, shiny and black again. 'Perhaps man will one day succeed in being able to live for centuries. What do you think?'

'We already have too many people on earth and enough problems, such as climate change,' replied the Dalai Lama, shaking his head slightly. 'I think it's a law of nature that people are born, grow old and leave the earth. That's the way it’s supposed to be. We also have to ask ourselves why we are here on earth, and I don’t think the answer is to live as long as possible. We must live as harmoniously as possible, with compassion for others.'

So, what about the invention of gene rearrangement, which allows diseases to be tackled in a whole new way? (See: ‘Gene rearrangement of T cells helps babies recover from leukaemia’.) What does His Holiness think about that? 'Life must be meaningful, not just extended for as long as possible. I understand people’s desire to live for ever – they love life, so it’s quite normal.'

The Dalai Lama avoided this question, possibly because he doesn’t know what gene rearrangement is. He’s clearly a very intelligent man, but not very well-informed when it comes to the latest technology, whispers a journalist who often writes about Buddhism. It looks like computers and smartphones have also passed him by.

During the final press conference, modern computer technology was discussed, although the Dalai Lama didn’t mention it specifically. 'It’s wonderful how technology brings us physical well-being,' he said, perhaps referring to the bionic arms of the young girl he’d met. ‘However, we must also ask ourselves whether technology brings us spiritual well-being. I often see people who are physically healthy, but at the same time much too stressed.'

It doesn’t take a lot of imagination to associate this answer with the relationship we have with our computers, smartphones and social media, which sometimes seem to have too much control over our lives (see: 'Device that helps you to focus').

On Monday 17 September, the Dalai Lama concludes his short Dutch tour with a public lecture in the Ahoy stadium in Rotterdam.