Atlas01, designed by the Delft Hyperloop student team, is ready for the speed race to be held on the SpaceX test track in Hawthorne, California, on 22 July.

The Atlas01 was presented this week by the 37 student members of the Delft Hyperloop Team in Delft. The launcher is the complete module with drive unit, brakes, battery and controls. The pod for passengers can be installed on top, as shown in the scale model provided by the Delft students. The challenge to be met is to reach maximum speed in a vacuum test tube of 1.2 km and to brake again on time before the end of the tube. For now only the launcher will go in de test-tube to reach maximum speed.

'This is the most extreme test you can imagine,' says Maurits Houck, technical manager of the team. 'Under normal circumstances, you travel at cruising speed and then gradually brake to slow down. That's now all been propped into a distance of one kilometre, so you need to accelerate and brake again at exactly the right moment. There's no leeway.' The target speed of the Delft team is confidential, but the competition target is around 800 km/h.

Braking at the right moment

The precise moment of braking was one of the first issues to keep the team awake at night. 'If you brake too soon, you won't achieve your maximum speed, but if you brake too late, you'll be launched out of the tube.'

The team applies three systems to detect the module's position in the tube. An Inertial Measurement Unit, which uses speedometers and gyroscopes to determine the distance travelled, an encoder on the engine that counts the number of revolutions, and a sensor that uses reflecting lines on the inside of the tube to determine its position. 'Thanks to the combination of these three, we know precisely enough where the pod is on the test track.'

The Delft team collaborated with engine manufacturer Scimo to develop a lightweight electromotor in order to accelerate as quickly as possible. 'It accelerates so quickly that a person in the pod would experience 1 G.' For safety reasons, the test will take place without passengers of course.

The braking process is super speedy. 'The launcher comes to a standstill in 2.5 seconds! The imaginary passenger in the pod is then subjected to a force of 6 G.' That braking process uses brake shoes forced at immense pressure onto the aluminium test track by gas from two small tanks. 'The brake shoe material is sufficiently soft that it won't damage the aluminium.'

The wheels that clamp the launcher around the I-shaped test track were a challenge in themselves. 'They need to ensure extreme drive, and must also serve as a shock absorber for any bumps in the track.' The team can currently choose between three versions: one made from special rubber, one with a coating and one that uses polyurethane. 'We're still deciding which works best.'

The irregularities in the test track also made quite a few demands of the vehicle itself. 'The track will never be super-smooth, as that would make it far too expensive. And so we rely on the suspension and shock absorbers to cushion the bumps, so the drive unit has optimum contact with the track.'

The launcher chassis is made of carbon fibre reinforced composite to keep it as lightweight as possible. The construction is particularly put to the test during braking. 'We've already carried out extensive simulations for the design.'
Much of the weight is made up of the batteries required to power the pod and to give it sufficient capacity to accelerate as quickly as possible.' 'Those batteries account for 40% of the total weight.'

The Atlas01 drives in the vacuum of the test track, which after all is one of the crucial advantages of the hyperloop concept as a whole. The launcher was tested for that purpose in a vacuum chamber at the ESA European Space Agency. 'There it became apparent that the plus and minus poles were arcing, which occurs much more readily in vacuum than under normal air pressure. They therefore required extra insulation, and that only becomes apparent after such a vacuum test.'

Whereas that test was relatively simple, Houck found the most tricky part to be the inability to test the drive unit and brakes at their maximum capacity. 'That's only possible in the SpaceX tube. Test and proof-of-concept are two-in-one.' However, the team found a solution by building their own roller unit suitable for the necessary high speeds. 'That helped us enormously in optimising the pod.' The team also constructed a short stretch of test track in their workshop.

Those test results may well play a major role during the competition in July. 'Not all pods are automatically allowed access to the tube. You need to be able to prove that the vehicle will stay on track and can brake on time. In the end, the competition organisers determine your target speed.'

The team received support from various companies in developing the launcher and pod. As already mentioned, the engine was built by Scimo, TenCate supplied the composite material, Eriks assisted with the drive system, Cognizant with the simulations, Dassault Systèmes with the control software, Danfoss with the test track, and so on.

Atlas01 will be heading for the United States next week, followed by the team in July, ready to conduct all kinds of tests in the week before the ultimate competition. 'In the end, the 15 seconds spent in the test tube will determine the results of a year's work by our team.' 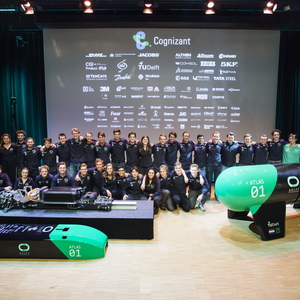 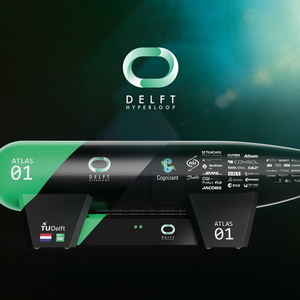 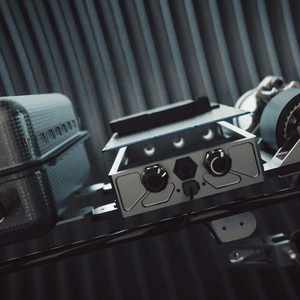 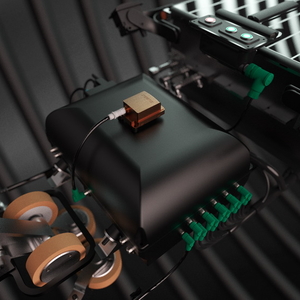 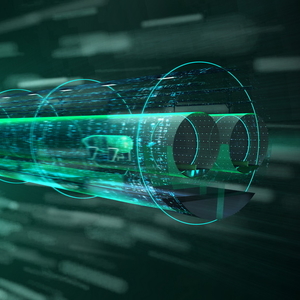