The Netherlands should make an effort to construct an underground hydro-electric power plant. Technically speaking a good option, according to 86-year-old Jan Huynen, who gained his doctorate in the subject last week.

The Netherlands lags behind other countries in terms of sustainable energy, though we are beginning to catch up. There are more and more solar panels on houses, solar parks are beginning to spring up and wind parks at sea are growing ever larger.

And this is gradually driving our country’s CO2 emissions down. However, the unreliability of the sun and wind means we risk suddenly run out of power in the Netherlands.

In order to safeguard against this, we are establishing all kinds of power connections with our neighbouring countries. Only last week, another one was commissioned. The underlying idea is that we buy in from our neighbours in times of deficit and in turn help them in times of surplus.

If only it were that simple, says Jan Huynen, who gained his doctorate at the University of Utrecht last Thursday. 'We currently still have a different energy mix to Belgium, France and Germany, but the trend is that we shall become increasingly similar.' When it’s wind-free, that often applies to the whole of Western Europe. The amount of sunshine is often also approximately the same in those countries. In other words: when we have a surplus of sustainable power, our neighbours have no need for it either. And when there is a deficit, they too must cope with the same problem.

FROM LOW TO HIGH

At those times when excess sustainable power is generated, there is the option to store the surplus. An effective method for this purpose is pumped hydro power. This is already common practice in mountainous countries. They're even already in place in the Belgian Ardennes (also see the opening photo). Surplus electricity powers pumps which pump water from low to high, to a high-lying reservoir. When there is no wind, the water is released to flow back down, passing through turbines and generators that generate electricity.

The Netherlands has no real height differences of course, and an underground solution is therefore necessary. While this idea is by no means new, Huynen's thesis now proves that it is viable. He sketches the possibility of energy storage underground, constructed using proven technology. 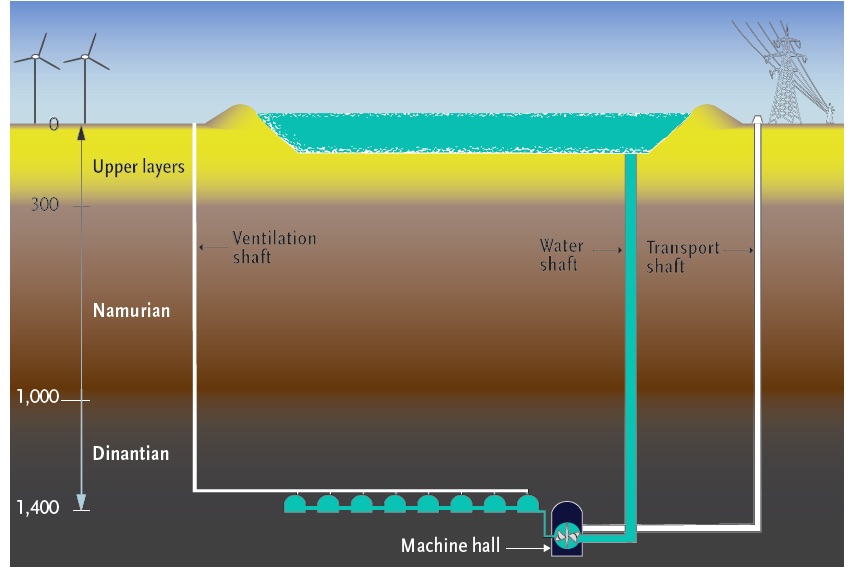 The idea is to create a reservoir above ground of around 400 x 500 m, and around 15 meters deep on average. If there is no wind, water will flow from here through vertical pipes into the ground, to a depth of approximately 1400 m. 'That's the maximum depth, as there are no pumps (as yet) capable of pumping it back up any further than that', says Huynen. The water drops down at great speed onto turbine blades that power generators. The water flows into an underground reservoir. Vice versa, in times of surplus sustainable electricity, water will be pumped up to the reservoir above ground. In this case, the electric pump is a turbine generator working in reverse.

Huynen has also studied the substrate for the planned water storage. Sixteen elongated caverns would need to be excavated in a carboniferous layer dating from the Dinantian epoch. This is a stable layer of rock between 1000 and 1700 m deep. Trial drilling in the vicinity of Beek airport in Zuid-Limburg showed only a small region around the drilling location to be suitable. 'This is proof that more extensive research is required in order to select a location', writes Huynen in his thesis.

Huynen was originally an economist and that is still apparent: he has calculated just about everything. The pumping station would have a maximum pump/generator capacity of 1400 MW, a storage capacity of 9.4 GWh and a drop of 1400 m. The storage capacity is an indication of the length of time during which the falling water could generate electricity: it would work for two days on a generated capacity of 200 MW, for example.

The plant would take around 6 to 7 years to construct, requiring an investment of 1.8 billion euros. That's certainly expensive, but the payback period for the plant falls within its operating life of an estimated 50 years, says Huynen. 'Surely we don't want to have to throw electricity away?'

The main advantage of a hydro-electric power plant versus other alternatives for energy storage is its enormous capacity. But Huynen is by no means blind to other storage solutions. ‘Part of the solution will also be found in power-to-gas, creating hydrogen, for example. Or batteries. Today's politicians seem to prefer battery packs for storage, but it's not exactly sustainable if we have to fill up the country with batteries. They can however play a role. I think we need to do everything possible to achieve sufficient storage of electricity.'