Current and expended offshore wind farm subsidies in the Netherlands stand at more than €12.5 billion. The good news is that the newest wind farms need 2 to 4 times less subsidy than older ones, according to an analysis by the Dutch Court of Auditors.

Offshore wind power was a key part of the 2013 energy agreement in the Netherlands, but earmarking €18 billion in subsidies did raise a lot of necessary questions. After all, €18 billion is a lot of money by any standard. The wind power industry and then Minister Kamp defended the agreement by promising to ensure that offshore wind power would cost 40% less by 2020 than it did in 2011. The Court of Auditors has now examined whether this promise has been fulfilled.

The answer is a resounding yes. In fact, at the time of the last expenditure of the Hollandse Kust wind farm, the price per kWh was 71% lower. 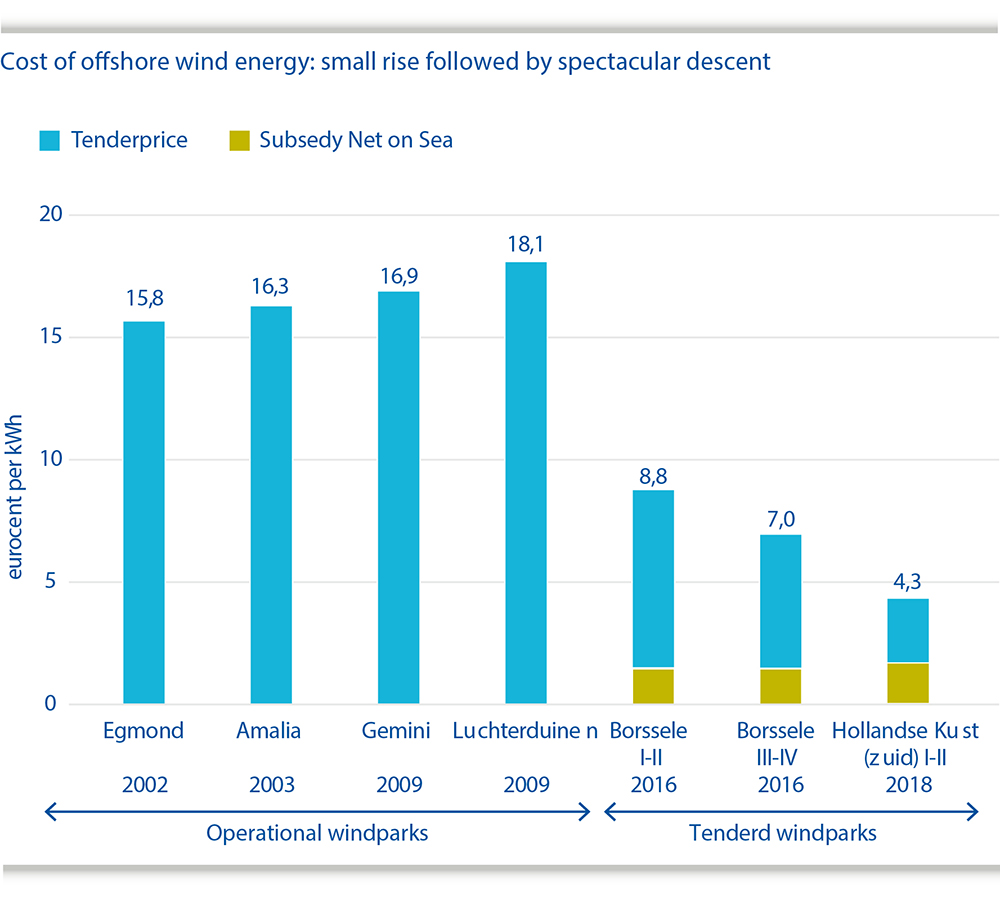 This was partly because the government is paying for the costs of connecting the wind farms to the national grid via grid manager TenneT, rather than the wind farm operators themselves having to put up the cash. For new and existing wind farms, this amounts to a total of €3.6 billion.

The Dutch government pays a subsidy for offshore wind energy according to the number of kWh supplied. The entity intending to build a wind farm usually agrees a minimum electricity price with the government, which is usually higher than the market price. The government pays the difference for a certain number of years via the energy subsidy. The amount spent on subsidies therefore depends on how much a wind farm produces and how electricity prices evolve.

The amount of subsidies that offshore wind power projects will receive, including the newest wind farm (Borssele, not built yet), can be calculated on the basis of estimates. The total expected subsidy amounts to more than €12.5 billion, including €3.6 billion for the offshore grid. 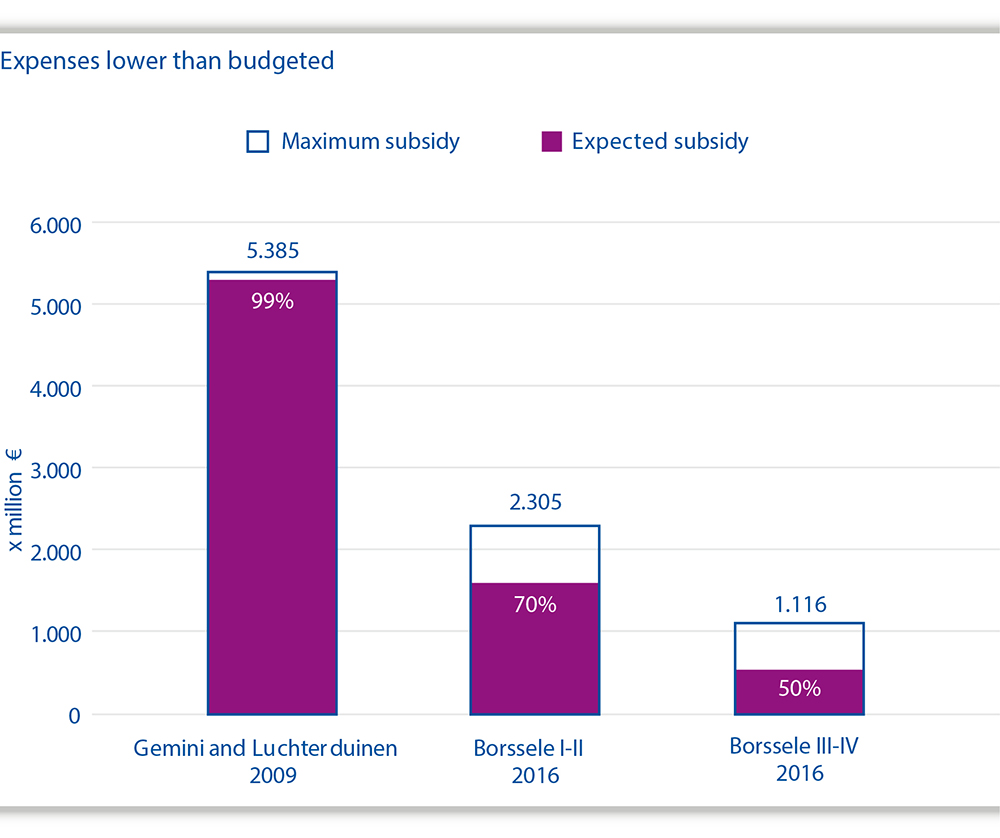 The Court of Auditors also investigated the cause of this fall in prices. It is mainly due to lower building costs in terms of unit capacity, which has dropped from between €2,500 to €3,000 per kWh to between €1,500 to €2,000 per kWh. This is due to the installation of larger, improved wind turbines, falling steel prices, better cooperation between the companies involved, and more favourable loan conditions. 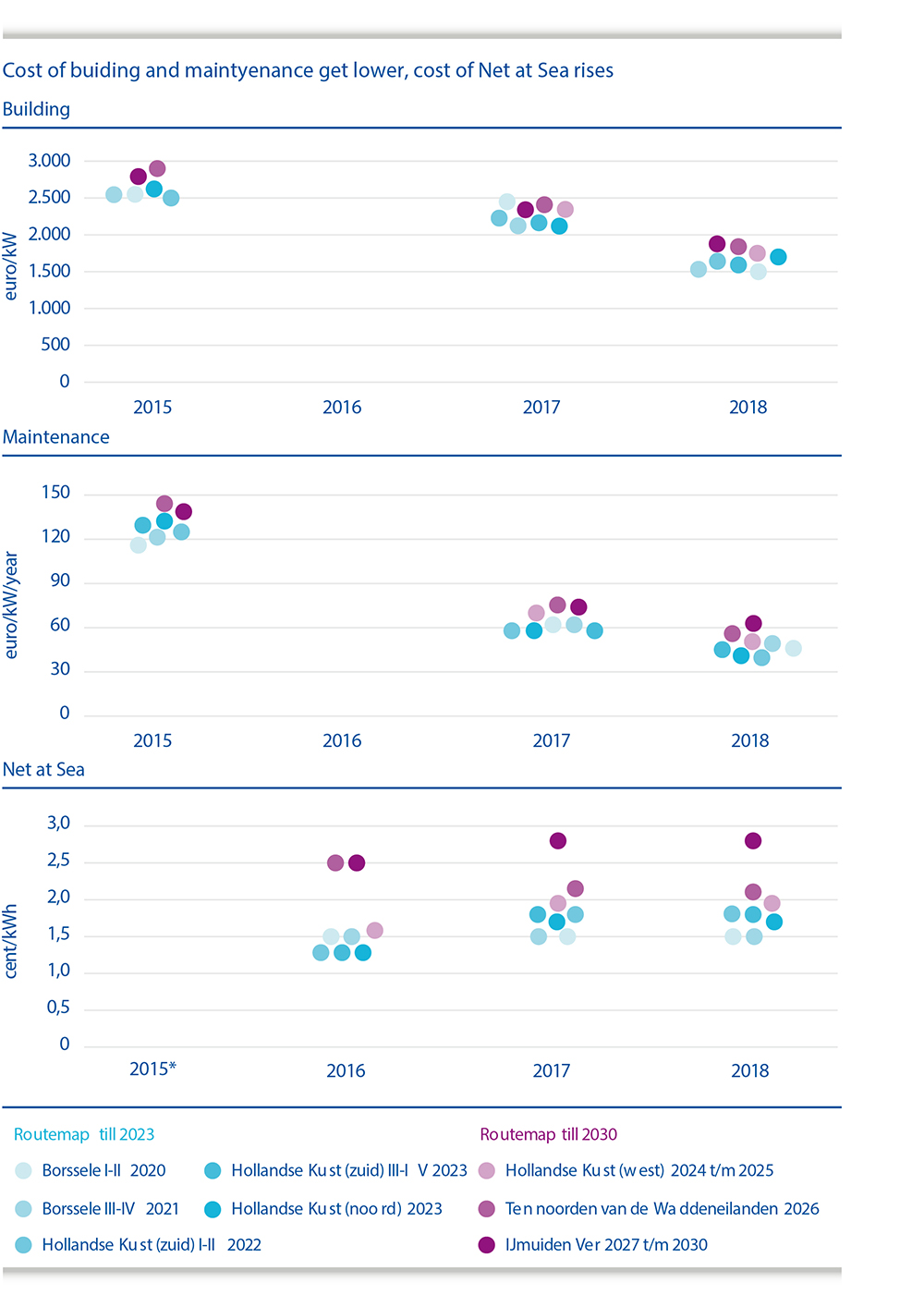 The costs for the offshore grid, on the other hand, have increased slightly, partly because of the greater distance of the new farms from the coast. TenneT is expecting costs of €5.1 to €6.1 billion for wind farms built through to 2030.

So offshore wind power will never be completely free of subsidies, as there are always the costs of the grid at sea. If more power is generated off the North Sea coast, then the onshore grid will also have to be modified. But remember that the government also covers the costs of modifying the grid when a power station is built onshore, so this subsidy is by no means unique to offshore wind energy.