The substructure of the first transformer platform for the new Borssele offshore wind farm is ready. This Sunday, the 50-metre-high colossus will be towed out to sea and erected in position.

The substructure is the first of two that will ultimately transport the power generated by the Borssele wind farms to the coast. The substructure is needed for the transformer platform that will be mounted on it. The platform includes a transformer unit and all associated electrical equipment and connections. The transformer boosts the power generated by the wind farms to 220 kV. A higher voltage means lower losses when bridging the 22-kilometre stretch between the wind farms and the landfall site of the cables at Borssele in the Dutch province of Zeeland.

Ducting for the wind turbine cables

The substructure, also known as the jacket, was constructed by a company from Schiedam, HSM, which up till now focused mainly on constructing platforms for the oil and gas industry. According to spokesperson Martin Kooijman, the 50-metre-high platform – weighing a total of 2900 tons – has a number of unusual features. The platform has 16 on-board ducts to guide the cables running from the wind turbines to the transformer unit. 'And due to its location, close to the funnel of the Channel with its strong sea currents, we have created a more heavy-duty platform than would be needed for the coast of the Wadden Sea, for instance.'

The transformer platform itself will be another 25 metres high, with a total weight of over 3000 tons. One new feature of this wind farm is that the turbines will supply power at 66 kV, rather than the normal 33 kV. The main advantage of this is that lighter cables can then be used from the wind turbines to the transformer station. This higher supply voltage is possible because each turbine has its own transformer.

Grid operator TenneT will be installing and managing all the connections of the wind turbines at sea. The company has opted for the so-called Dutch standard version of the transformer platforms. 'We use the same design for all wind farms located not too far out to sea,' says TenneT spokesperson Jeffrey Leek. 'That gives us the greatest possible cost savings.'

Ultimately, the Borssele wind farm, the construction of which is split into two zones of 700 MW each, will require two transformer stations – one for each zone. The two cables make landfall at Borssele, with the electricity they supply being prepared at that location for the 380 kV high-voltage grid.

Opening photo: the substructure is ready to be towed out to sea. Photo: Robert Nagelkerke. 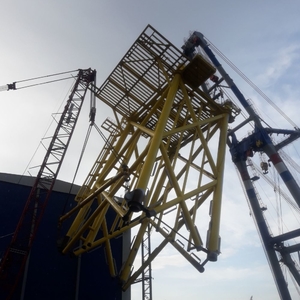 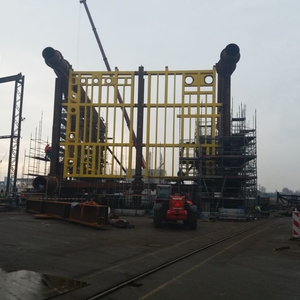 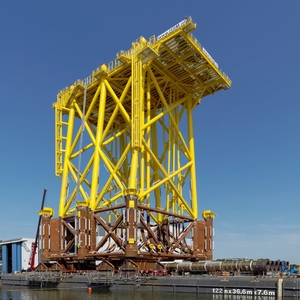