There is an increasing need for electronic devices that monitor bodily functions, specifically in the healthcare sector, but also for top athletes. However, mini sensors stuck to the skin hinder the release of moisture and can result in irritation. Japanese engineers have now presented the solution: a sticky sensor which fits like a second skin and is breathable.

Doctors regularly want to monitor a patient's health for a while, while they go about their daily business. How is their blood pressure? Their blood values? How much does their blood sugar level vary throughout the day?

Whereas all kinds of complicated monitoring has been required up till now, using bulky machines to provide answers, more and more mini monitoring devices have become available in recent years that patients can wear all day long. These take the form of a plaster or are even thinner.

The most important benefit of such thin sensors is that they can be worn all day and therefore allow for many more monitoring moments. This gives doctors and nursing staff a better idea of symptoms, when a certain disease is suspected, or during recovery from a disease. However, there is also a disadvantage to such high-tech stickers. They are generally airtight, so the underlying skin cannot breathe. This may result in itching or more serious forms of irritation, and even an infection in the worst-case scenario.

Luckily, a solution seems to be at hand. Researchers and engineers from the University of Tokyo have developed an electronic sensor which can be attached to the skin, yet is moisture and air permeable (press release). Trial patients wearing the patch all week long suffered no irritation at all. Ideally, the individual that wears such an extremely thin plaster should completely forget it's there. 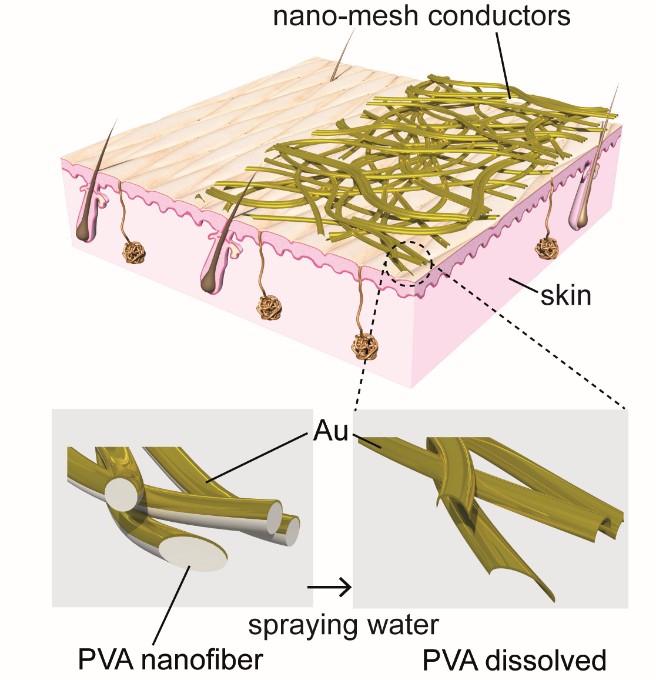 The adhesive electrode from the Japanese researchers is made from criss-cross gold nano fibres, giving a structure which conducts electricity (see illustration). A number of steps were required in order to create this structure. The researchers began by producing polyvinyl alcohol (PVA) fibres by means of electro spinning. This network of fibres was then covered in a 70 - 100 nm thick layer of gold, with the use of a mask resulting in the required pattern. An adhesive patch of this dual component material (PVA fibres with a thin layer of gold) was then attached to the skin. By spraying it with water, the PVA dissolved in the water and could be rinsed off. The result is an ultra-thin (just tens of nanometres), flexible adhesive gold sensor which moulds to the skin's curves – the layer even follows the ridges of a fingerprint.

It all looks very impressive, but how does the adhesive electrode actually work? To start with, the Japanese showed its suitability in conducting an electromyogram – a test aimed at studying the conductivity of nerves and muscle activity.

Twenty trial patients were then fitted with this adhesive electrode around a finger, and wore it for a week. At the end of the week, the researchers checked the condition of the skin under and around the sticker. There were no cases of irritation or even worse reactions.

In a separate test, the researchers determined the moisture permeability of the sticker. When compared with other materials used for adhesive sensors – plastic film and a thin layer of rubber – the new sticker was by far the most permeable. And it’s probably this property in particular that ensured that the trial patients were free from itchiness.

Suitable for daily use

Another requirement for such adhesive sensors is that they are long-lasting. They therefore need to be considerably resistant to all kinds of deformation caused by daily use. The Japanese scientists tested their adhesive sensor by bending and stretching it hundreds of times. The properties of the material remained measurably intact. Electrical conductivity is good, but gradually declines once the adhesive sensor is stretched by more than 15 %.

According to the researchers, the results are proof that such materials and this production method are very promising for the manufacture of practical, wearable sensors. In the press release, research head and Professor Takao Someya concludes 'In the future, we shall be able to monitor patients' vital functions without any bother or stress for the patient'. Top athletes will also benefit, however. All kinds of important values can be monitored during training, without any hinder from the monitoring device.