When a company imports vegetables or fruit, they still require certificates to be posted guaranteeing the quality of the produce. That's a slow and labour-intensive process, which can also result in the loss of information. T-Mining, a company in Belgium, wants to change this by recording the process in a blockchain. This will speed up administration, and make it more reliable and cheaper.

It might be hard to believe, but for every load of vegetables or fruit entering a port, there are envelopes in the post containing certificates that show where the load originates from, who will pick it up from the port, and affirming the quality of the produce.

Only when the necessary certificates have been received and checked by officials may the load be released from the port, and the fruit distributed throughout the country. This process using paper certificates with stamps is cumbersome and leads to delays, as the papers sometimes take longer to arrive than the ship containing the fruit.

Since we're now in 2018, Belgian start-up company T-Mining thought it was high time for a change. Together with the Antwerp Port Authority, Belfruco, Enzafruit and PortApp, T-Mining is now running a pilot project in which a single type of certificate is placed in a blockchain in digital form. This relates to so-called phytosanitary certificates, a statement by the authorities of the country of origin that the products are healthy and not suffering from any (plant) diseases.

A blockchain is a way of recording transactions very efficiently in a network with different nodes. This architecture gives users direct access to the necessary information, and makes fraud extremely difficult. 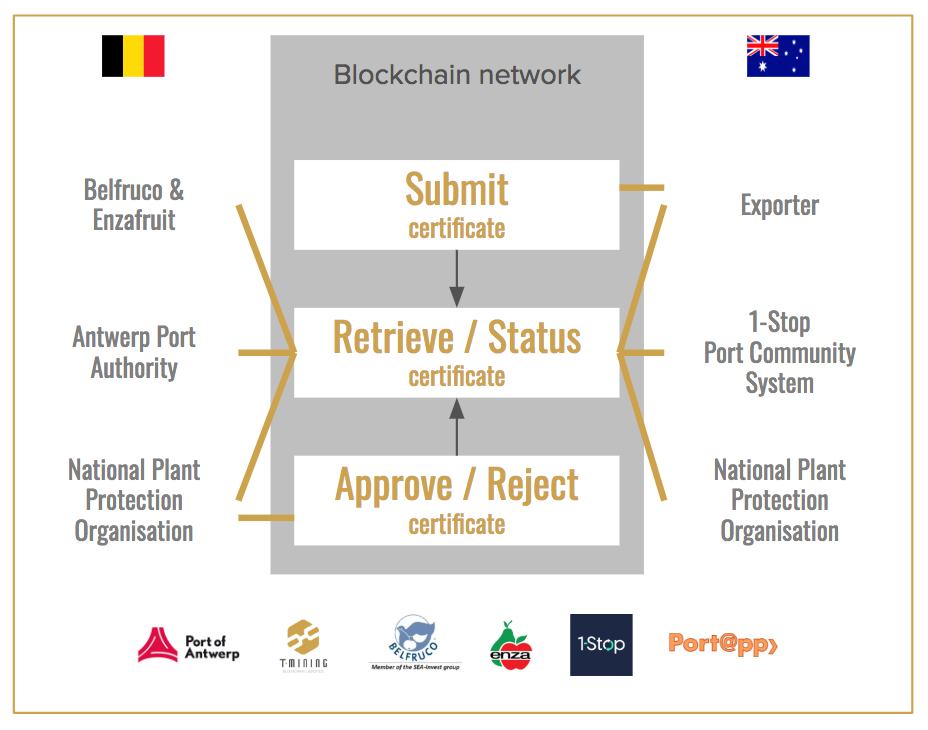 The application on which this project is focusing is the import of consignments of apples from New Zealand to Belgium. When a ship leaves port on the other side of the world, the exporter sends certificates by post to the importer in Belgium. There the authorities assess whether the fruit may be imported – does it meet the necessary conditions.

In this process, the certificate is passed from hand to hand several times, i.e. from one entity or company to the next one. The blockchain is set up in such a way that here too a digital document may only be in the possession of a single party at any given moment. But the blockchain also guarantees the veracity of the document, as it's not possible to alter it undetected – the main benefit of blockchains.

The blockchain is initially running on a small number of nodes. These are computer servers located at several partners to the project: the Antwerp Port Authority, Belfruco, T-Mining itself and the New Zealand Port Authority. In future, the number of nodes must increase.

In five years time, nobody will be talking about blockchains any more, as the technology will simply be running quietly in the background.

This blockchain specifically delivers greater efficiency – time savings – as certain checks will no longer have to be done by humans. This involves programming so-called smart contracts into the blockchain software. For example: ‘If you are company X, then you may forward the certificate’, and also: ‘Only if you are authority Y may you generate a certificate.’

The blockchain is already up and running, parallel to the traditional method of posting the certificates. ‘We are investigating how this works in practice. Can people work with it properly? Does it really result in the higher efficiency we're hoping for? These are the questions we want to answer,’ says Nico Wauters, CEO of T-Mining.

If the pilot project is a success, the company wants to use the blockchain technology for other certificates and documents as well. ‘Dealing with these types of documents is a fairly general process, with the same steps repeating over and over again, such as generating, transferring, approving or rejecting documents, and so on. So our back-end software can be used for many applications,’ says Wauters. ‘By the way, I think that nobody will be talking about blockchains in five years. The technology will simply be running quietly in the background by then, just as we currently have protocols on which the internet runs.’