A special salt has been developed that can capture more than its own weight in water from the air at night, and then release it during the day. Salt can be a good source of water in remote arid regions.

Researchers at the King Abdullah University of Science and Technology (KAUST) in Saudi Arabia found a way to use the salt calcium chloride (CaCl 2) to collect water. Although scientists have known for a long time that calcium chloride can absorb a lot of water, just like other salts, there was a big problem. After a while, the salt becomes an undrinkable black slurry. It takes too much time and energy to extract the liquid from the salt for it to be a useful method of collecting water.

However, the salt does turn out to offer great potential if two novel ideas are added. Firstly, the researchers incorporated the salt crystals in a hydrogel, a type of gel that can absorb large amounts of water. When the salt absorbs water from the air, the gel sucks the water out of the salt, so it remains solid.

HALF A CENT A DAY

A prototype containing 35 g of carbon nanotubes, hydrogel and calcium chloride collected 37 g of water overnight, when the relative humidity was 60%. After 2.5 hours in the sun, all this water had been released into a collection tank. Since the air in dry areas contains quite a lot of humidity, the system appears to have a lot of potential. The advantage of this invention is that the materials needed to make it are cheap. A scaled-up model that absorbs 3 litres of water per day would only cost half a cent a day. Most of the costs lie in the material, because the gel has to be replaced regularly. 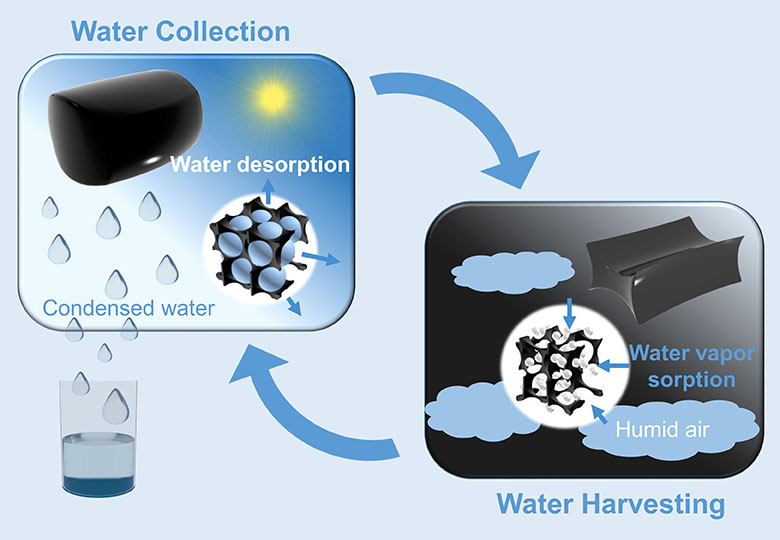 It remains unknown if the gel will also work on a large scale, as every part of it has to be in contact with the air in order to work properly. There are other ideas floating around for obtaining water from the air. A polyester sponge recently won an award, and another idea uses extremely porous material that also extracts water when humidity is low.