Five projects from engineering consultancies have been nominated for Vernufteling 2018 (the ingenious). The public can cast their vote until 15 January.

The five projects are: a monitoring tower for noise nuisance from aircraft, a label for flooding, a virtual reality environment for improving fire safety, a school cooled using river water and CO2-neutral road maintenance.

The Vernufteling is the prize for the best project from an engineering consultancy, organised by branch association NLingenieurs and De Ingenieur journal. In 2017, Royal HaskoningDHV won with Flowtack, a system that ensures improved traffic flows around intersections.

These are the five projects:

Antea Group's monitoring tower makes it clear how much nuisance locals actually suffer from an airport. 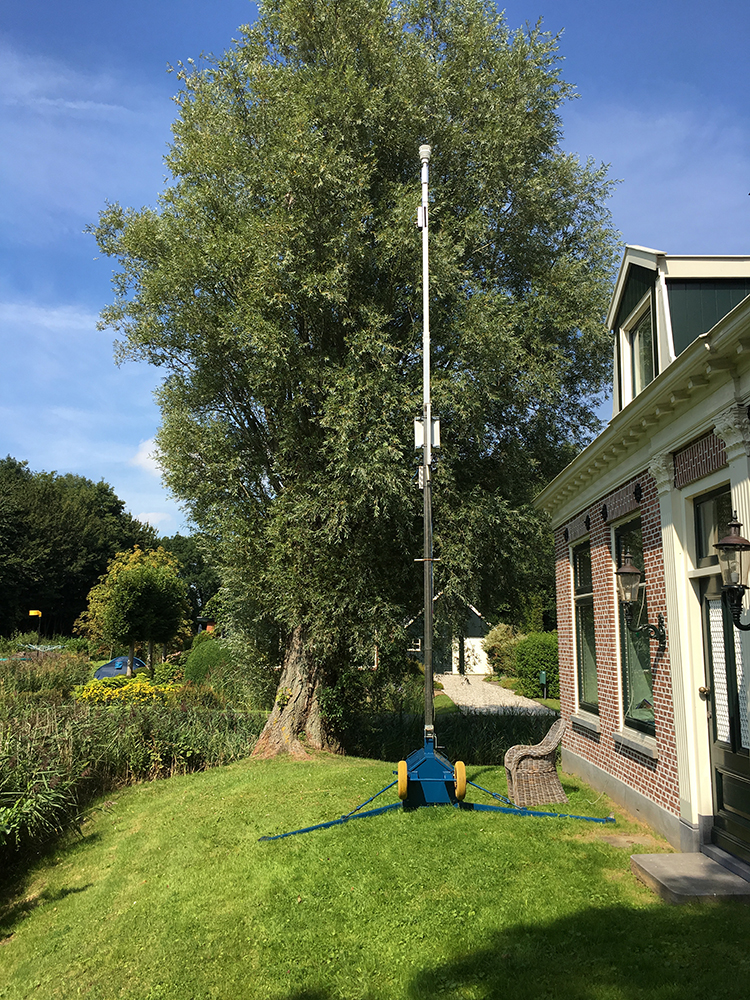 The military airport near Leeuwarden has flights by not only F-16s, but also F-35s. The Minister assured locals that they wouldn't experience more noise from the new aircraft. And strictly speaking, in terms of the decibels, that's true. ‘But how you experience noise depends on more factors than just decibels. And we can now measure that using our new sensor towers’, explains Dirkjan Krijnders from Antea Group. ‘We recorded the noise and analysed it. It turns out that the sound of F-35s lingers for longer, which makes for a very different experience of noise nuisance.’

It's just one example of the insight that the tower is giving us. It can also distinguish between various sources of noise, measure the amount of (ultra-fine) particulates and apply weather forecasts to adjust its measurements. ‘Wind in particular has a massive impact on the amount of particulate matter measured.’

Analysis of the sound is still done ‘by hand’, upon completion of the recordings. In Leeuwarden, an employee also stood beside the tower to note when an aircraft flew over, in order to establish the link with the sound recording. ‘In theory, you could also do this automatically. But for now, there's no need for that, as manual analysis works well enough if you only have a single tower.’

The tower is mobile, so it can be deployed anywhere. It could for instance be a solution if air traffic increases at Lelystad. ‘You could even link flight details to the sound recordings, to identify at any which point in time which aircraft produces which sound.’

And in terms of particulate matter, too, the tower provides information, as demonstrated in Leeuwarden: ‘You can clearly see a peak in ultra-fine particulate matter at the point at which an aircraft flies over.’ The disadvantage is that the sensor tower only measures the number of particulates, while government regulations require calculation of weight per m3. ‘So it's more an indication than a fixed measurement. However, such indications can tell us a lot. And the tower suggests a trend over days or months, which often provides a clearer picture than snapshots.’

Antea initially developed the tower for a client who lives close to the Frisian airport. He wanted to know the exact situation in the immediate vicinity of the airport. ‘This monitoring tower provides greater insight into all sorts of guidelines and removes the fears of local residents or points municipal authorities to areas where noise or particulate matter can cause nuisance.’

What happens to my house during extreme rainfall? Will i get water inside? Royal HaskoningDHV introduced bluelabel, which answers that question in an easy-to-understand way.

Climate change is expected to result in extreme rainfall occurring more frequently, similar to the shower in Herwijnen in 2011, when 90 mm fell in an hour or so. Obviously drains cannot cope with precipitation of this intensity, and streets get flooded. ‘BlueLabel indicates the risk of water damage for all types of buildings’, says Hanneke Schuurmans of Royal HaskoningDHV. ‘Our ambition, thanks to BlueLabel, is to create a standard labelling method for flooding that will also play a role in new-builds.’

The risk scan was developed together with insurer Achmea and water consultancy Nelen & Schuurmans. ‘But the question as to how extreme rainfall causes flooding is quite complex. BlueLabel translates this into something more appealing and understandable for everyone.’ Label A indicates a low risk of flooding. No water is expected to reach the external walls. Label E means a high risk of water in the dwelling.

Schuurmans estimates the accuracy of the risk calculation at 75 to 80%, with large local variations. ‘We prefer to work with maps on which the government relies, and some are more reliable than others,’ she explains.

The BlueLabel service has been set up in such a way that when a municipality supplies detailed data, for instance relating to its own sewerage system, this is easily processed in the computational model. ‘Furthermore, municipalities may derive labels from their own flooding maps and present these to citizens via the internet.’

But why provide information for individual homes, when flooding measures are usually taken at the level of the residential area or catchment area? ‘People's own homes are what concerns them directly and where the damage arises for them. And they want to know what it will mean for them if measures are taken.’ And that's the way in which the City of Rotterdam, for instance, now uses BlueLabel to make the city resistant to flooding, together with its residents.

Engineering consultancy Witteveen+Bos built a virtual reality experience in which smoke behaves just like it does in reality, to make tunnels or buildings as fire-safe as possible.

Brussels is very busy renovating its metro stations. They are beautiful old stations, but fire safety is not optimal. How do you best render such a complex structure as a station, with multiple entrances, halls and open spaces, resistant to smoke and fire?

A new virtual reality simulation by Witteveen+Bos offers a solution. ‘You divide the building into tens of millions of cells. You then calculate the fluid dynamics of the smoke in each of those cells,’ explains Tamara Dolle. The dynamics are scientifically verified, so they correspond well with what happens in practice. Wind, the number of people in a space, the shape of the pillars – they all affect smoke development, and this is reflected in virtual reality. The VR experience also simulates the assessment plan of a space, so each aspect of a fire or accident can be viewed virtually.

Based on the simulation of a Brussels station, the architect and designers could see what the effect would be of certain measures. ‘Thanks to our VR simulations, they knew what was needed to render the entire building safe in the event of fire,’ explains Aryan Snel.

One disadvantage is calculation times. ‘Even with 16 to 32 processors, it takes a week to fully calculate the simulation of smoke development,’ explains Dolle. So seeing the effect of a new design in real time is not possible for the time being. ‘But as computers become even faster, we will at some point be able to link multiple simulations to each other,’ suggests Snel.

The VR experience makes the calculations more understandable than a two-dimensional picture. ‘It gives understanding and insight to people who have less knowledge of smoke development,’ says Dolle. This means the simulation can help authorities to make decisions. But the fire department also gains greater insight by walking around in a simulation of a tunnel fire. ‘And if you already use this simulation during the design process, fewer fire-restricting measures are required at a later date,’ says Snel.

The Merlet college in Cuijk, Brabant, uses water from the river Meuse for cooling and heating. Engineering consultancy Nelissen designed the systems. 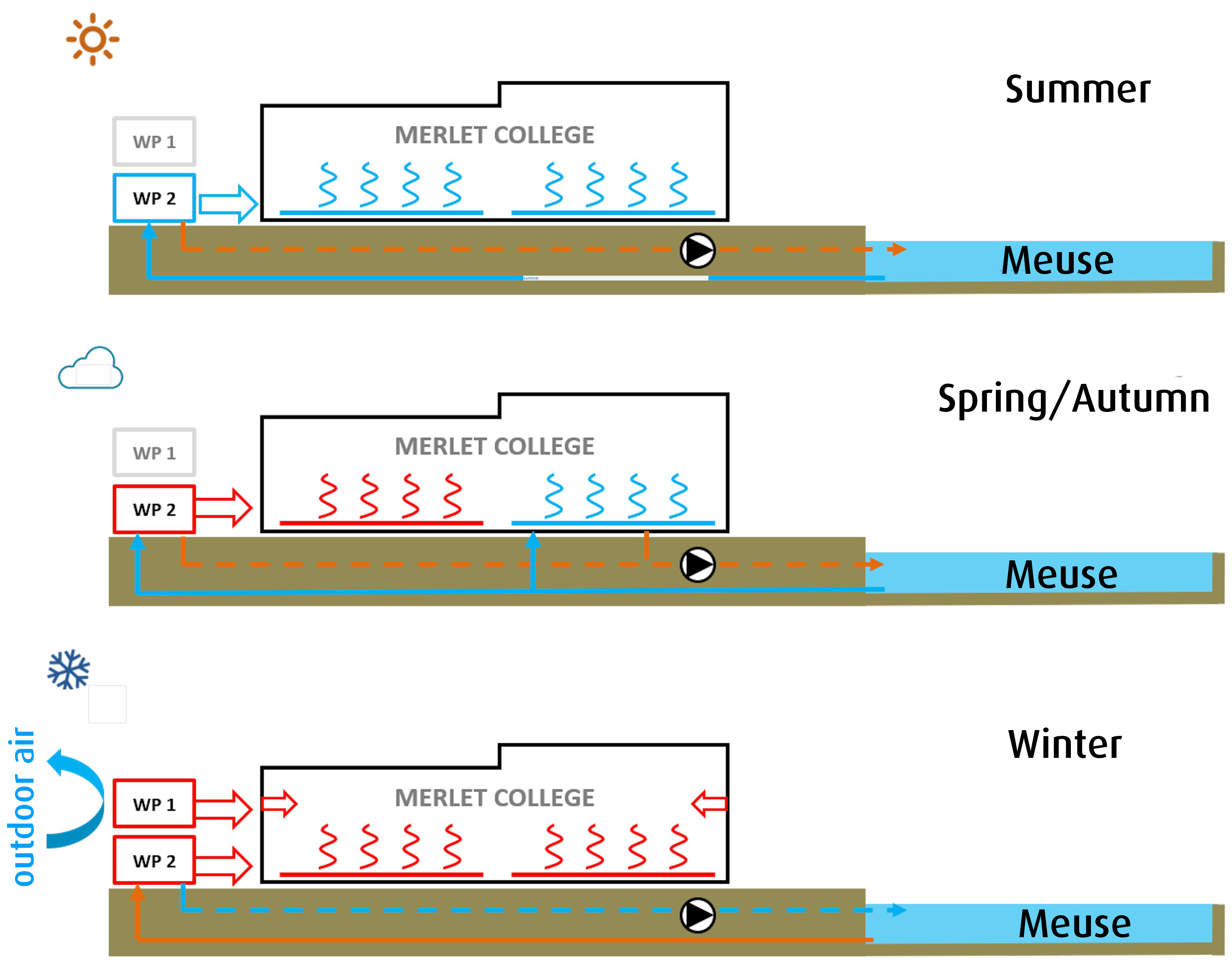 Using surface water for heating and cooling is no longer unusual. Like for instance the Maastoren in Rotterdam, in combination with heat/cold storage. ‘But no one's ever done it at a school,’ says consultant Jeroen Houben of engineering consultancy Nelissen. Unfortunately, the ground at Merlet College was not suitable for heat/cold storage. However, the school is located close to the Meuse river. That's why Houben really wanted to use river water, in combination with heat pumps.

Over the course of the year, cooling is the main requirement. ‘The students themselves form a significant source of heat, and Merlet College is so well insulated that we sometimes even need cooling with outdoor air temperatures of 5 to 7°C.’ In the spring and autumn, this cooling is provided directly by water from the Meuse. ‘All that's needed is a pump.’ On warm summer days, the heat pump also runs to provide active cooling.

In winter, the Meuse-water heat pump is used at water temperatures above 4°C. ‘However, an air heat pump then provides support. In the event of extreme cold, we fall back on a traditional gas-fired boiler, which also provides heat for the tap water.’ Furthermore, the classes feature air ventilation, with air being preheated where needed.

All things considered, the system concept as installed delivers a significant reduction in energy consumption. ‘Compared with an air heat pump alone, we are 30 to 40% more economical. However, this does require additional investment, but the school recoups this fast enough.’

The school has now been in use for a year. ‘In outline terms, it's going well, although there were the usual teething problems when programming the system. Now we've been going for a year, we are more aware of where the energy requirement lies, and the system is running as intended.’

The next project to use the energy of a waterway is already in the pipeline: the new construction of Holland Casino on the Merwedekanaal in Utrecht.

Major maintenance to the N470 was taken by the Zuid-Holland provincial authorities as the opportunity to create an energy road. Engineering consultancy Tauw supplied the technical and project expertise.

The Zuid-Holland provincial authorities wanted to link the N470 to its sustainability ambitions. The tender therefore had to be carried out on a different footing. ‘And that's where we came into the picture,’ says consultant Patrick Morren of Tauw. ‘Initially to help provide some focus. We opted for energy saving and generation, with the aim of turning the N470 – which links the A12 at Zoetermeer via Pijnacker and Delft to the A4 – into a CO2-neutral road.’

It was then up to Tauw to draw up a range of possible technical measures, partly on the basis of consultation with interested companies, to provide relevant advice, and ultimately to help in making choices. ‘We ensured that all proposals were assessed as to the degree to which they contributed to the central energy objective: at least CO2-neutral and preferably better.’

The end result is impressive, Morren believes, with solar panels in the noise barrier, a battery for energy storage, smart road lighting and traffic control systems, and other CO2-reducing measures. ‘Ultimately, it was Boskalis that managed to work all these measures into a winning tender proposal. Boskalis also suggested a new type of asphalt with a lower rolling resistance. And that helps to make road traffic more economical.’

What makes the project even more unusual according to Morren is that it doesn’t just involve a trial panel here, and a small DC pilot there. ‘All technologies must be used to the full and thus be directly applicable on a larger scale. And our role was to assess that.’